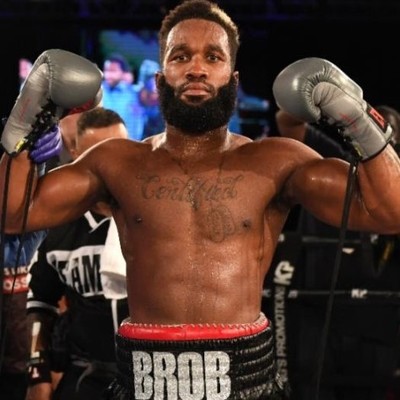 6/5/21 A day/night doubleheader in early June taking place in South Philadelphia and Major League Baseballs Phillies were not competing at Citizens Bank Arena. This doubleheader took place at the 2300 Arena and the participants wore boxing gloves not baseball mitts.
Kings Promotions delivered a six fight appetizer for mid afternoon and a seven bout evening entre. The two fightcards were the first fights since the pre covid pandemic that allowed full capacity and liberated the vaccinated from wearing masks.
In the main event super middleweights Brandon Robinson of Upper Darby Pa faced off against Gene Pllano of Hagerstown Maryland in a scheduled eight round contest. A good match up on paper that did not disappoint as Pllano scored an upset eighth round knockout victory.
Strong and awkward Pllano always provides a difficult challenge for his opponents. Robinson,166.9 lbs., was able to successfully navigate past Pllano 168 lbs., uncourtly style winning two of the first three stanzas by being more active. Plano was cut around the eye by an accidental head butt in the second. Getting inside Pllano’s long arms Robinson was scoring straight stiff jabs followed by right hands the first three sessions. Fighting out of a conventional stance Pllano was scoring to the body with an unorthodox right hook/uppercut just under Robinson’s left elbow. These body blows by Pllano were accurate and were accompanied by a loud thud. Midway through the fourth one such blow backed up Robinson and Pllano unloaded a right to his jaw. Badly wobbled Robinson and was saved when a Pllano uppercut went south of the border. After taking time to recover Robinson went on the attack when the action resumed and buckled Pllano’s knees with left hooks to the chin. Still Robinson returned to his corner on wobbly legs at the bell. Looking to be on his way to victory, Robinson stuck to his game plan until Pllano landed a right hook/uppercut to the body near the end of round seven. Backed against the ropes Robinson could not fend off Pllano’s barrage of punches. A right to the jaw dropped Robinson, who was able to rise to his feet to be saved by the bell. Beginning from the sound of the gong to start the last round Pllana landed a barrage of head and body shots until a solid right to the jaw had Robinson crumble in his corner. Refere Shawn Clark jumped in and called it off 33 seconds into the session. Robinson stayed down for a few minutes as the ring doctors checked him out. Robinson is 15-3 10 ko’s, all three losses were knockouts. During the post fight interview Pllana yelled out “Berlanga!” in an attempt at calling out the young super middleweight prospect Eric Berlanga. Pllana record now stands at 9-3-1 5 ko’d
All seats were filled in the evening portion of the day’s activities with several dozen more spectators standing around the perimeter of the arena. In the semi wind up popular welterweight ticket seller Elijah Morales, 146.5 lbs, Trenton NJ, raised his record to 8-0 4 ko’s by winning a shutout unanimous four round decision over Andres Abarca of Normandy Washington. Never relenting his attack, Abarca flew across the country to take home a “W”. Abarca 145 lbs is 2-5 0 ko’s.
In the afternoon most of the seats were filled to watch Devar Ferhadi of Federick, Maryland outpointed Blake Mansfield of Cary, NC in an eight round super middleweight matchup. Mansfield, 167.75 lbs., put forth a spirited effort . Ferhadi, 167.75 lbs., won a unanimous decision by scores of 80-72 and 79-73 twice. Ferhadi continues his career with a record of 9-0 7 ko’s. Mansfield drops to 7-4-1 4 ko’s’ 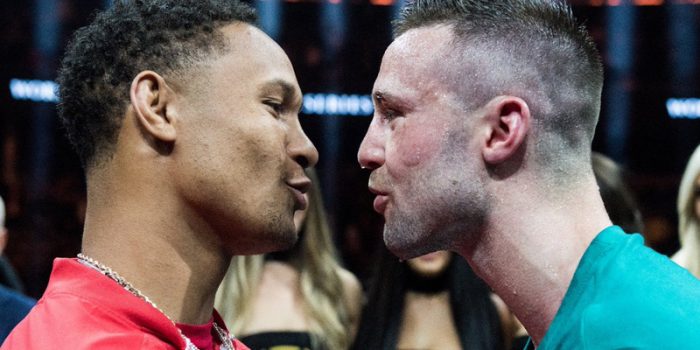 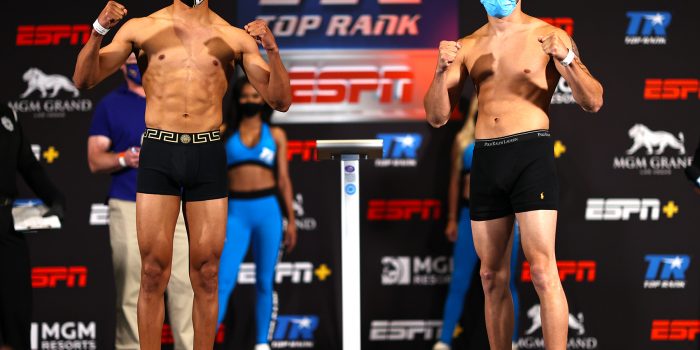 Felix Verdejo vs. Will Madera Weights