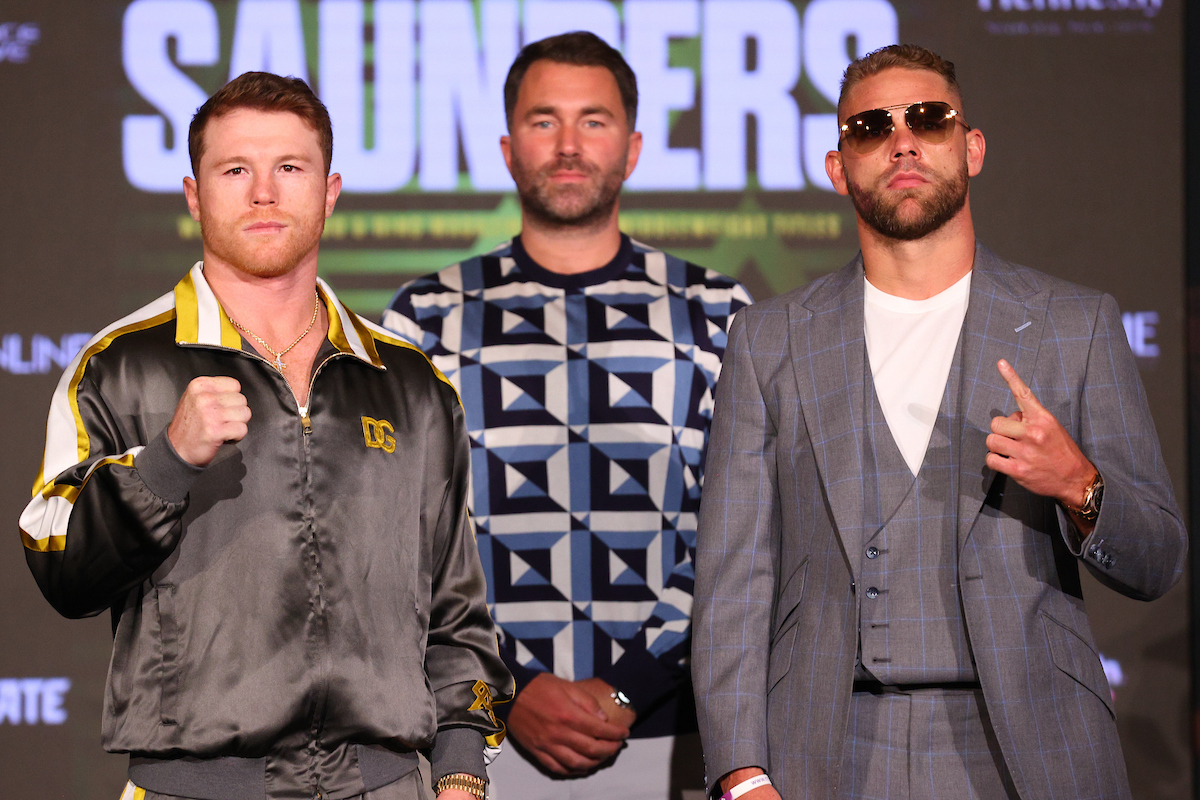 “I feel really thankful with the response of the people and that boxing is a sport that brings everything back to normal. I’m ready for this fight.”

“He’s a great fighter, he has a lot of ability and he’s a southpaw. I’m not the same fighter I was six or seven years ago, this Saturday I will show that.”

“I’ve been involved in a lot of big fights and this is just another day at the office. I come to win, like I said boxing is my life and I come here to win.”

“It’ll be a great fight, two of the best middleweight fighters in the world in front of 70,000 people – especially after the pandemic. It gives me a lot of joy and honour to be there as a Mexican in the ring.”

“He’s a great fighter, he’s a two-time champion for a reason. He has a good trainer, he knows how to defend, he moves around really well. We know it’s going to be a good fight on and off the ring.”

“I’ve been boxing all my life, I’ve been boxing since I was five years old, I’ve dragged up – on the gypsy camps. We can all have the rough, tough talk growing up as kids. I’m here for a reason, there’s no other reasons for me to be here apart from to win. Not about fame or anything else, to win.

“I don’t think we’ve had somebody come to win for a very long time. We’ve had a lot of people turn up, collect cheques and fly out but we haven’t had the heart, soul and IQ that I’ll bring to the ring on Saturday night to win.

“I can’t talk what he’s done down, he’s done brilliant things for boxing. He’s a good champion but like I said, there’s a time in life where you get tested, sometimes when you forget where come from and forget all those hard things that’s brought you to where you’re at sometimes that can make it difficult on yourself. I think he’s going to be bumping into the wrong man Saturday night to be going home with titles. I’m looking forward to a very good fight but most definitely the win.

“I think I’ve been up against the crowds before; I’ve travelled as an amateur to the Olympics game at 18, there’s no bigger pressure on someone’s shoulders when they’re stepping in front of millions of people there.

“There’s added pressure coming for both of us for this fight because both of us don’t want to go home the loser. At the end of the day, half the Mexican people like him, half don’t, so hopefully half that don’t like him will be supporting the Gypsy boy, we’ll get it rocking and rolling. This is for all the Gypsies back home, everyone in the UK, plus half the Mexicans, get behind me.”

“He’s been boxing since he was five years old, he’s amateur pedigree is second to none. Everything is there and we’re ready for the job.

“This is what we’ve been waiting for, he’s trained all his life for it. We’ve left no stone unturned and on fight night you’re going to see something special. There’s only one winner, that’s Billy Joe Saunders.

“I’ve been speaking to a lot of people back home and the UK’s right behind him. There’s a lot of gypsy magic in this fight, there’s a spell been cast so we’ll definitely see something special.”

“I’m very happy for this opportunity, he’s a really good fighter and we’re going to come out here and try to do a good job.”

“It’s a great emotion inside, it’s a great opportunity that was given to be and I have to take advantage. I’m very happy inside.”

“I want to come out victorious this Saturdayand after that maybe think about unify at 108 pounds and continue to move forward.”

“First of all, thank you for giving me this great opportunity. On Saturday, I look forward to giving back the title from two different divisions.

“If I didn’t believe I could win I wouldn’t be here. It’s good to finally be here, it took a long time to get that visa – I didn’t think it was going to happen. If anything, it’s made it better for me, we’re getting the job done, looking to put in a decent performance on Saturday night and really impress.

“That’s what it’s all about, taking the opportunity. I’m not nervous yet, this is my job – it’s boxing. I’ve got nothing to be nervous about, this is what dreams are. I came from small hall boxing, making no money when I was fighting, sometimes even losing money to fight.

“Now I’m here, there’s no pressure on me, I’m here to put on a real solid performance on and come out with the win. I’m excited and ready to go.

“All those guys are looking for the right route, the easy route, the one they think is comfortable. Including Ted with Metcalfe, it is what it is with that fight. I’m here to test myself, Soule is a very good fighter, I’m here to show I’m the best of that division.”

“We had good preparation for this fight, a good camp, the sparring was good. Josh is ready, more than ready for his next fight. I’m ready to go for Saturday and next for Josh.

“In front of 70,000 people, that’s amazing. This is a big blessing for me, this is a huge card and I’m very happy to be here. My first international belt on the line, that’s very good for me – I’m more than ready.”

“All I can say is, I’ve been blessed. I had a lot of major setbacks in 2020 but to be on my third Canelo card I feel like this is all God’s plan all along.

“Truth is, I’ve come to do my job. I want to show everything but I’m going to do my fight and if the knockout comes, it comes.

“It’s a huge opportunity for me, I’ve been training really hard. I was training for another fight, but it got cancelled twice. Three weeks out they call me, and I really liked this fight. I stayed in shape and accepted the fight – I really like this match.

“This is a good opportunity, he’s a good fighter – top of the world right now. This will change my whole career and life. I’m been training, I’ve been doing my thing, I’m healthy and I’ll have to do what I have to do.”

“I’m glad I’m back here, with DAZN, makes me feel like I’m at home for some reason. I appreciate the love you’ve been showing me and my brother – life is great right now.

“I want to start looking like a real professional fighter in there only going six rounds. I want to show these top guys right now that Keyshawn Davis is here, he’s coming and he’s on your heels.

“Kelvin’s a great fighter, he’s 1-0 fighting a fighter who’s 8-2. I feel like that speaks a lot about him, I feel like Kelvin is going to shock a lot of people. He’s 6’0, 140, southpaw, lengthy, power, strength, he really has everything I have except from the big opportunities that I had. Now he’s got one this Saturday and I feel like he’s going to show everything he can come to the table with.”

“This is a really big for me. I’ve been fighting all my life for an opportunity like this, so I’m really blessed for the opportunity. This is my time to showcase my talent and what I can really do.

“Truth is, it’s a great opportunity and I want to thank you for allowing me to be on this card. I’m going to give it my all on Saturday, show all the preparation that’s gone in and hopefully have a good result.

“The plan for me is to do as much as I can in boxing and if there’s something more than being the champion of the world, we’re going to work towards achieving that as well.” 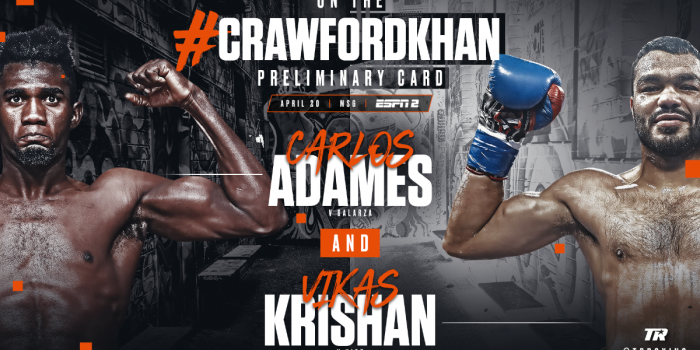 MSG Crawford/Khan Card will be Packed 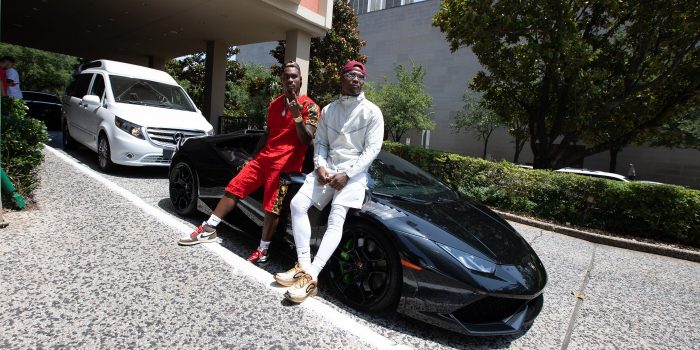