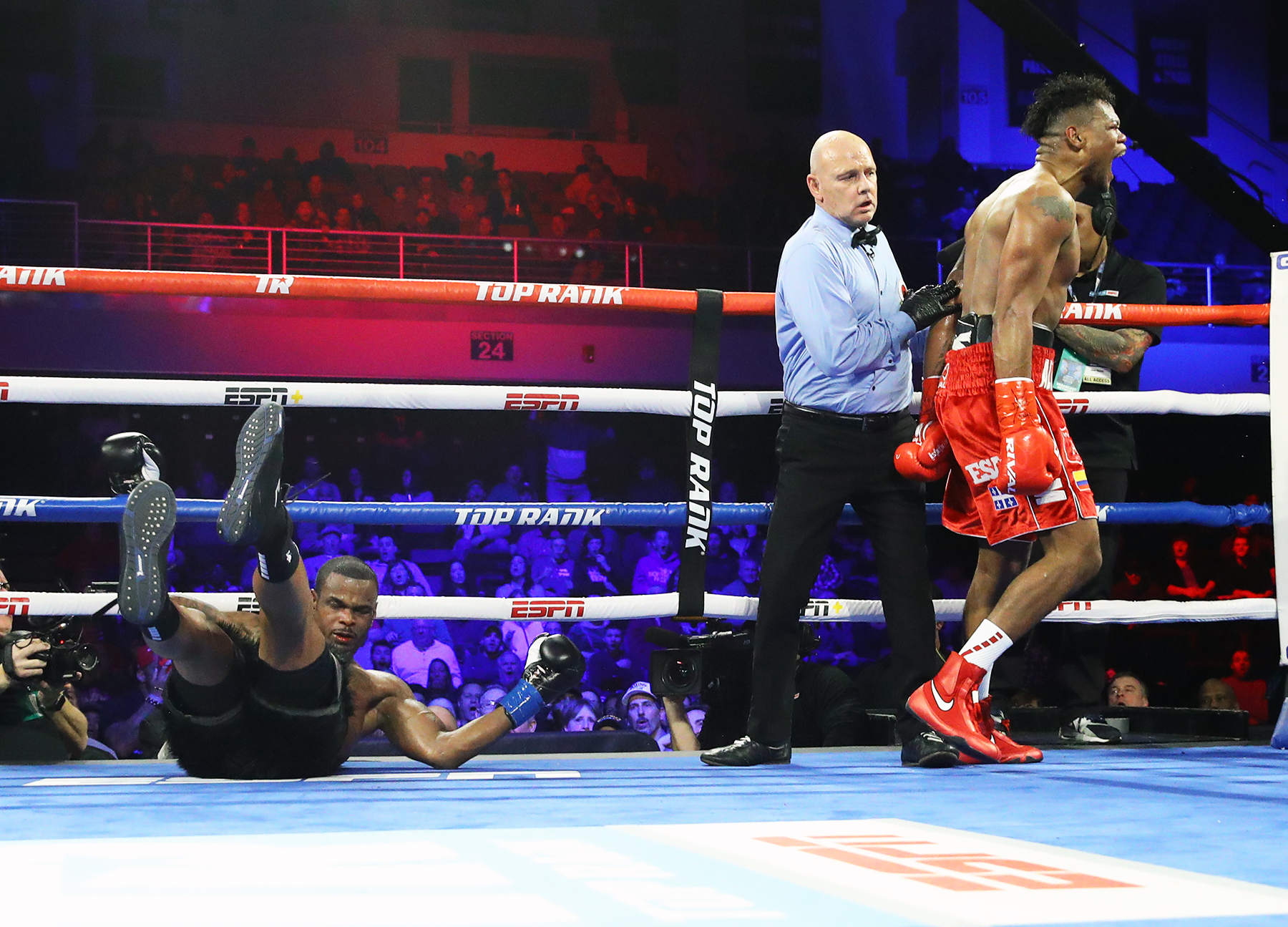 As snows falls in the frigid cold temperatures of the northeast, nothing stopped the fans from coming out to the Top Rank Boxing Show at the Turning Stone Resort Casino in Verona, NY.

Alvarez comes out with an overhead right. Seals staying in the pocket and staying very patient and very poised.

Alvarez lands a good right hand as these two young bulls go at it. Alvarez lands another big right that might have woke Seals up. Some may wonder what Seals is waiting for.

Alvarez’s little is better then Seals Zero. Alvarez up 3-0. Seals did let his hands go in the closing seconds. He is extremely powerful.

Excellent, Excellent round for both boxers, as the fight is now starting up and someone is going night night in a shocker.

One thing for sure, Alvarez can take a punch. Alvarez won the round as Seals is smothering his punches.

“During training camp, we practiced {the right hand} over and over. My trainer with me at first because I wasn’t doing what he was asking. Finally, we got the knockout,” Alvarez said.

“I was out of the ring for 11 months. I wanted to come back as the fighter that beat Kovalev, and this is what we practiced for.”

The Puerto Rican Verdejo clearly the bigger man in the ring with a bit more pop. He has that big Deontay Wilder type right that he can’t wait to fire off. Texas’s Rojas is going to have to be crafty against this young lion who seems to be a weight -class bigger.

Verdejo now controlling the fight with his power jab that has the smaller Rojas off balance. Rojas might have to start taking some chances.

Rojas landed a few good punches, but Verdejo has the fight in Cruise-control. Verdejo is not only bigger and stronger, but biggest advantage is his speed. Rojas is showing a hint of good counterpunching ability thou.

Verdejo is winning the fight, but he’s not learning and getting better. It’s all about sitting down on his punches which won’t work when he faces the top 10 on the planet.

As the muscular Verdejo is getting tired, Rojas is coming on strong winning round 6 and rocking Verdejo back at the closing bell. This will be very interesting as the tide is starting to turn.

Rojas doing some good counter punching. Both boxers had good moments, but Rojas’s work to the body is special.

Rojas now the aggressor trying to impress the judges is eating a few unnecessary shots. Verdejo Landed some good combinations, but Rojas is getting the better of it at the moment.

What a round for both fighters, boy ow boy did Rojas hit Felix Verdejo’s body. A great fight by two well conditioned warriors.

This is what boxing is all about!!!

Winner by UD as the Crowd Boos a bit.

After the fight, Verdejo said:

“I give myself a ‘C.’ I want to keep working hard and keep developing because I want to look like an ‘A’ fighter.”

“I have the desire. I have the hunger. I’m going to keep working hard for all the Puerto Ricans and all the Boricuas.”

Other Results from The Turning Stone Casino:

Both guys throwing well, but Bisbal’s size/ weight advantage wearing Vargas down a bit. And down goes Vargas from a beautiful short left. Vargas gets up and does some good work upstairs as Bisbal continues to work the body.

Vargas seems to have caught a second wind, but both guys have there moments and fought a great round almost to a stalemate.

Vargas seems to be a bit more busier, but both boxers doing good work. The referee takes a point away from Bisbal for pulling Vargas’s head. Vargas lands a huge left uppercut and doubles it up. Then he lands a monster left hook that causes Bisbal to pull Vargas’s head down again and the referee takes another point from Bisbal making it a 10-7 round for Vargas. Referee is getting a bit to involved now.

Bisbal musters up enough energy to win the round against a tired Vargas. Vargas tries to steal the round in the last 10 seconds, but it probably didn’t work.

Bisbal lands some good lefts up and down stairs, but Vargas landed the left hand at Will the entire 3 minutes.

Bisbal landed the cleaner more powerful punches as both guys are showing the carnage of war. Vargas tried to steal the round, but got caught and rocked at the bell.

The crowd goes crazy as the referee stops the fight after a little touch low blow from Bisbal. The referee says he’s Disqualifying Bisbal for Multiple low blows even though he never got a warning. He only warned him about pulling the head down. It’s to bad because this fight needed one more round to see who was the better man this evening.

Albany NY’s own Abraham “SuperNova” comes out against Mexico’s sub 500 fighter – Pedro Navarrete using a crisp left jab and great head movement. In the second round, SuperNova catches Navarrete with the tail end of a left body shot that sends Navarrete down. SuperNova finishes the 2nd round of very strong landing a big right hand to Navarrete’s temple.

In the 3rd round, the 26 year old Nova knocks down Navarrete with a big right hand and continues to show that he is not only in a different talent pool, but also a much more conditioned boxer. Seconds into the 4th round, Nova lands a right to the body and left to the head sending Navarrete down and causing the referee to call the fight.

The 26 year old Puerto Rican -SuperNova improves his unblemished record to 18-0 with 14KO’s.

Talking about his win, Nova said:

“I could’ve taken him out a little earlier, but I needed the rounds. When my trainer told me to knock him out, I went out there and ended the fight.”

Jonathan King Salomon Guzman enters the ring wearing red, white & blue as the Dominican says a prayer in a neutral corner before the fight. Hernandez is wearing blue trunks with yellow trim.

Guzman comes out throwing big power hooks and FoFo Hernandez keeping his shots a bit more short and straight. Big right to the body sends FoFo down, he gets up and goes down again from another right to the body. FoFo gets up and they start brawling with FoFo’s back against the ropes. Wow what a round!!

In another terrific round that has this New York crowd buzzing. Guzman continues to pound the body but being a bit more cautious. Both boxers start going to toe-to-toe and Hernandez catches Guzman with a monster right hand that drops Guzman. Guzman really hurt now, but manages to beat the count and gets saved by the bell. What a fight!!

Both combatants doing good work and stealing the show. Guzman now catches FoFo with a left to the head that rocks him. FoFo somehow recovers and keeps punching. Guzman lands another terrific combination with the key punch being a left to the body. FoFo’s heart wanted to continue but his body couldn’t anymore as Guzman wins by third round KO.

DIAZ after the big Win says:

“I am very happy to have returned to the winning route. I showed that I don’t only know how to brawl. I also know how to box very well. Before, what I wanted was to give fans wars to entertain them, but I learned that I can also give good, entertaining fights by boxing well. ”

“Being calmer than usual was part of the plan. When you face high-level fighters, you have to add more tools to your arsenal, and that’s what I’ve learned with Freddie Roach. I used to be a good fastball pitcher. Now, in addition to the fastball, I learned to throw curves and sliders. ”

“I want to fight again for a world title. I want to face the best. And I’m willing to face anyone to achieve my dream of becoming a world champion. ” I am very happy to have returned to the winning route. I showed that I don’t only know how to brawl. I also know how to box very well. Before, what I wanted was to give fans wars to entertain them, but I learned that I can also give good, entertaining fights by boxing well. ”

“Being calmer than usual was part of the plan. When you face high-level fighters, you have to add more tools to your arsenal, and that’s what I’ve learned with Freddie Roach. I used to be a good fastball pitcher. Now, in addition to the fastball, I learned to throw curves and sliders. ”

“I want to fight again for a world title. I want to face the best. And I’m willing to face anyone to achieve my dream of becoming a world champion. ”

Guzman & Hernandez Stole the Show- WHAT A FIGHT!!!

After a feel out first half to round one, Diaz starts to put his stamp on the fight with his unusually heavy featherweight hands. Thou Santos had 15 KO’s in 19 victories he is displaying average power at this level which is allowing Diaz to be the aggressor.

Santos sensing he is losing every round, comes out in round 4 looking to make something happen. Diaz still walking thought Santos shots and catches Santos with a big left hook that stuns Santos. Santos is still game as he continues to battle but gets caught with a terrific right-left combination from Diaz.

Christopher Pitufo Diaz is in some Kind of shape. He is letting his hands go all three minutes of every round with a ton of power shots to boot.

Diaz catches Santos with a good wide left hook in the middle of the final round (8th) and puts Santos on his bicycle for the rest of the round. Diaz dominated the fight and won all 8 rounds. The judges gave Diaz all the rounds with all three scoring the fight 80-72 giving Diaz the Unanimous Decision.

Anderson comes out of the gate with his hands down, letting the power shots fly. He lands a nice left to Satterfield’s body that sends him down. Anderson has a crisp left jab, but sometimes takes his eye of the target when throwing his power shots. Young Anderson has a lot of work when it comes to the defense side of the sweet science.

Anderson lands a barrage of head shots that sends Satterfield down again in the first round, and the referee stops the fight.

The Heavyweight Anderson from Toledo, OH improves his professional record to 3-0 with 3 KO’s. 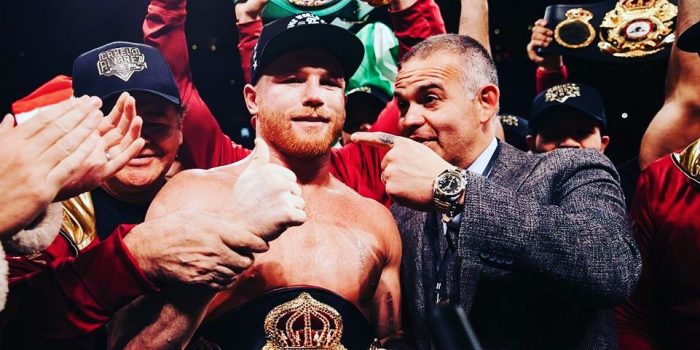 No doubt Canelo Álvarez is boxing’s biggest superstar and attraction.   Some will argue that... 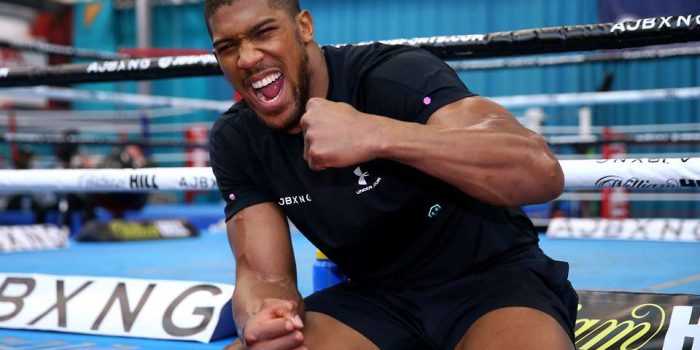 Anthony Joshua says he is preparing for a tough test against Andy Ruiz Jr, but...