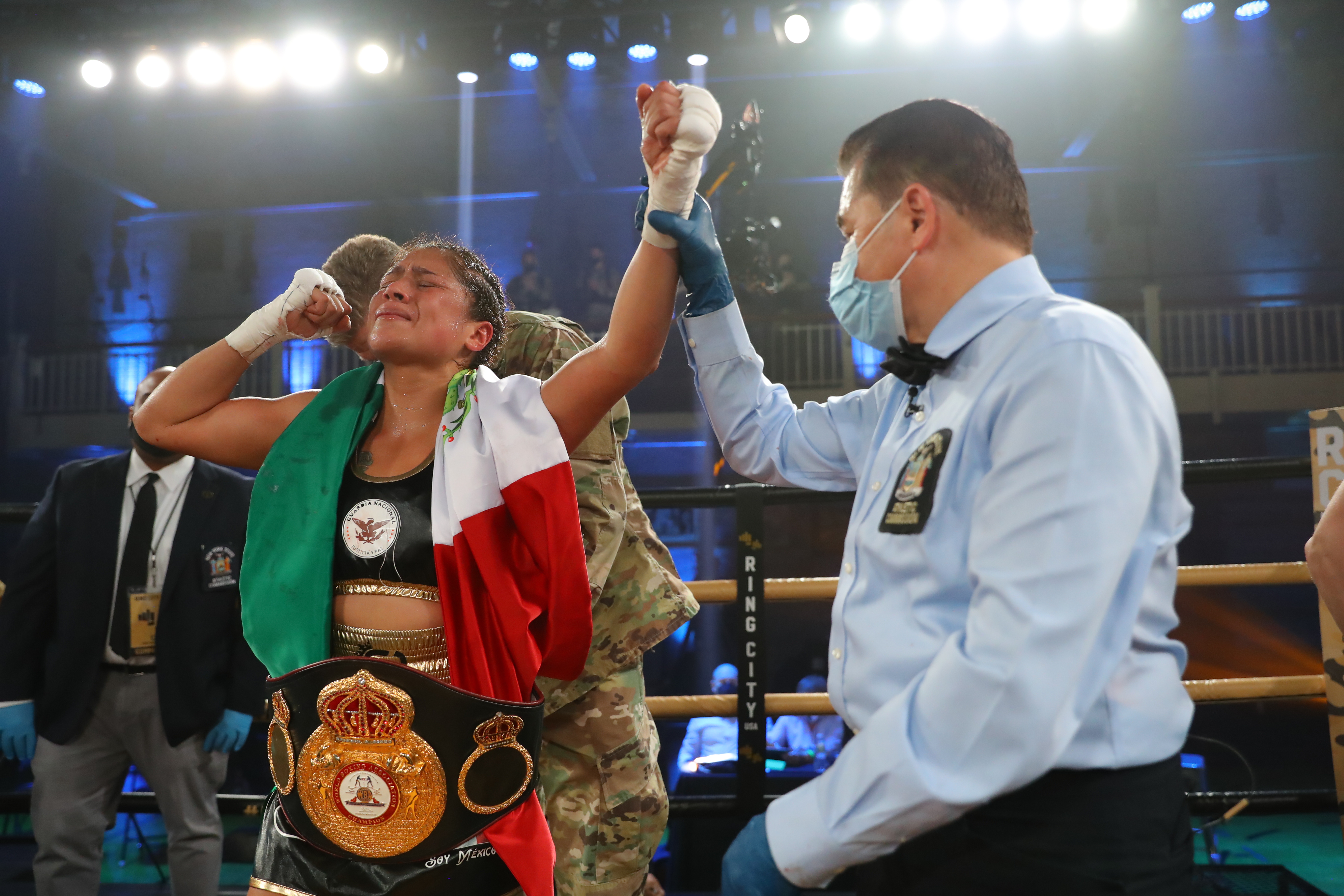 Cruz (13-1-0, 3 KOs) cut short the title reign of three-division world champion Mrdjenovich (41-11-2, 19 KOs) as she attempted to make her sixth defense of the WBA crown. Cruz, 30, came out fast and overwhelmed the champion with wide, yet effective, power punches and a barrage of combinations. This was the first time that Cruz did not have her father and lead trainer Guillermo Cruz in her corner.

“I told you yesterday, Mexicans are warriors and I demonstrated that,” said Cruz. “Every single round that went by, I thought of my father and this victory is for both of us. I couldn’t come this far and disappoint him. I didn’t and now I will bring this title back to him.”

As predicted by both fighters during fight week, the righty vs. lefty matchup led to numerous head clashes early in the fight. In the third round, the commission ruled that a cut over Mrdjenovich’s right eye was caused by a clash of heads, but a Ring City USA replay showed that the initial cut opened as a result of a thunderous right hand from Cruz.

“At first I was nervous but as I saw that my punches were more powerful, I realized that this was my strongest weapon,” explained Cruz. “She endured because she has experience. She connected on me a few times and I realized I couldn’t get too close, I had to be careful. But my power is what carried me forward.”

Referee Benjy Esteves called a halt to the fight at :25 of round seven due to the deep cut over Mrdjenovich’s right eye from earlier in the fight. The fight went to the scorecards where all three ringside judges saw the fight identically as a clear shutout victory for Cruz at 70-63.

“She came to fight and go to war,” said the former champion Mrdjenovich. “I am super disappointed that the fight was stopped. I got away from my game plan and it’s disappointing to lose my world title. I fight well in the later rounds and I am disappointed I didn’t get to show that. I have been known to drop my opponents in the later rounds. I felt I was starting to find my groove and I am just disappointed.”

For Mrdjenovich, 38, of Canada, the fight marked her second fight on Ring City USA and her first time fighting a southpaw in more than 13 years. Her face was bloodied in the later rounds and she was ruled unable to continue. Following the fight, on Ring City’s post-fight show Inside the Ropes on Twitch, she called for a rematch.

“Sometimes it doesn’t go your way,” added Mrdjenovich. “I am going to lick my wounds a little bit and get back to the drawing board. We will see about a rematch. I feel a little cheated tonight.”

Immediately before the main event, Angel Ruiz (17-1, 12 KOs) and Bobirzhan Mominov (12-1, 8 KOs) met in an action-packed 10-round welterweight fight. Ruiz, 23, of Tijuana, Mexico, who now resides in Los Angeles, met the early pressure of Mominov with crisp counterpunching and earned a close unanimous decision on the scorecards. The three ringside judges saw the bout 75-74 and 76-73 twice. Unofficial ringside scorer Steve Smoger also scored the fight 76-73.

“I’m back, baby,” exclaimed Ruiz following his hard-fought victory. “I was working for seven months for this fight. I was working with my coach Manny Robles. I just have a great team and we worked so hard for this opportunity.”

Mominov, 29, of Kazakhstan, worked the body throughout the fight but his punches often ventured below the belt line. In the second round, referee Charlie Fitch warned him for a low blow and in the fifth round, he was deducted a point for another low blow. This was the third time in four fights that the Kazakh was docked points. Following the break in the action for the point deduction, Ruiz immediately floored Mominov with a left hand. Another looping crisp left hand from the 23-year-old southpaw sent Mominov to the canvas again in the seventh round.

“Bobby is a warrior. A real Kazakh warrior,” said Ruiz’s trainer Robles, who used to train Mominov. “But with Ruiz, the work isn’t done. He hasn’t fought in well over a year, but we still took on a tough test because we wanted an opportunity. We were knocking at the doors of different promoters and we thank God that Ring City gave us an opportunity on this huge stage. Hopefully, we will be back on a big stage soon.”

In the co-main event on NBC Sports Network, which opened the telecast, Juan Pablo Romero (14-0, 9 KOs) earned a unanimous decision over veteran Deiner Berrio (22-3-1, 13 KOs) in a 10-round welterweight fight. Romero, 31, was the far more active fighter throughout the fight and dealt well with Berrio’s unconventional style. In the second round, an accidental clash of heads resulted in a deep cut above the right eye of the undefeated prospect from Mexico.

“The key to winning this fight was managing the long distance and doing what we trained for,” said Romero. “He was a very strong and complicated opponent. Without a doubt, he put up a great fight tonight.”

Colombia’s Berrio, 30, countered well early in the fight and neutralized the three-inch reach advantage of Romero but it was the 2016 Mexican Olympian who was far busier throughout the fight and flashed his deep amateur pedigree as he cruised to victory. Ruiz was humble in victory and reiterated his goal of becoming a world champion.

“The next thing is to recover and continue training,” added Romero. “We are going to look for another victory. The road to the world championship is very long and every day we get closer. The results are not the work of chance, they are a result of perseverance and discipline. There is much to learn and much to improve.”

Earlier in the evening, in the main event live on Twitch in the U.S. and around the world, Christian Mbilli(18-0, 17 KOs) remained perfect with a fifth-round technical knockout over Jesus Antonio Gutierrez(27-5-2, 14 KOs) in a super middleweight fight. France’s Mbilli, 25, continued his ascension from prospect to title contender with his fourth consecutive stoppage win and put the division on notice.

“This fight was a message,” said Mbilli after his emphatic finish. “I am ready for all the fighters and this was a message to all the middleweight fighters in the United States. I am coming for everyone. Canelo (Alvarez), (Daniel) Jacobs, (Edgar) Berlanga, Caleb Plant. I am ready for anyone.” 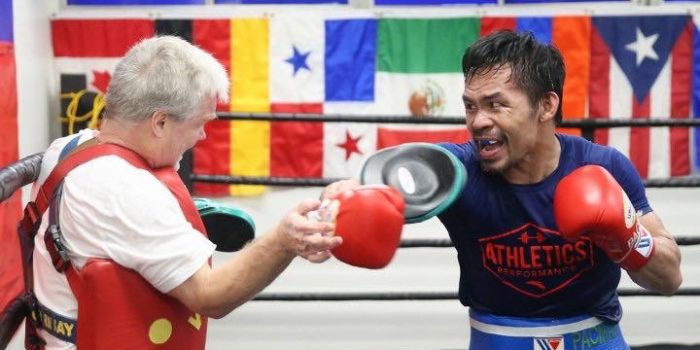 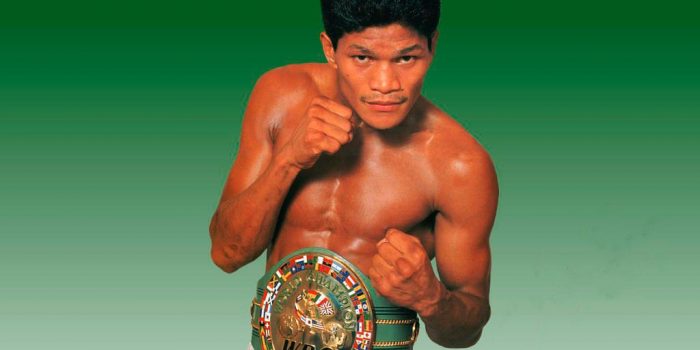 On this day in history, Filipino Luisito Espinosa defended Title