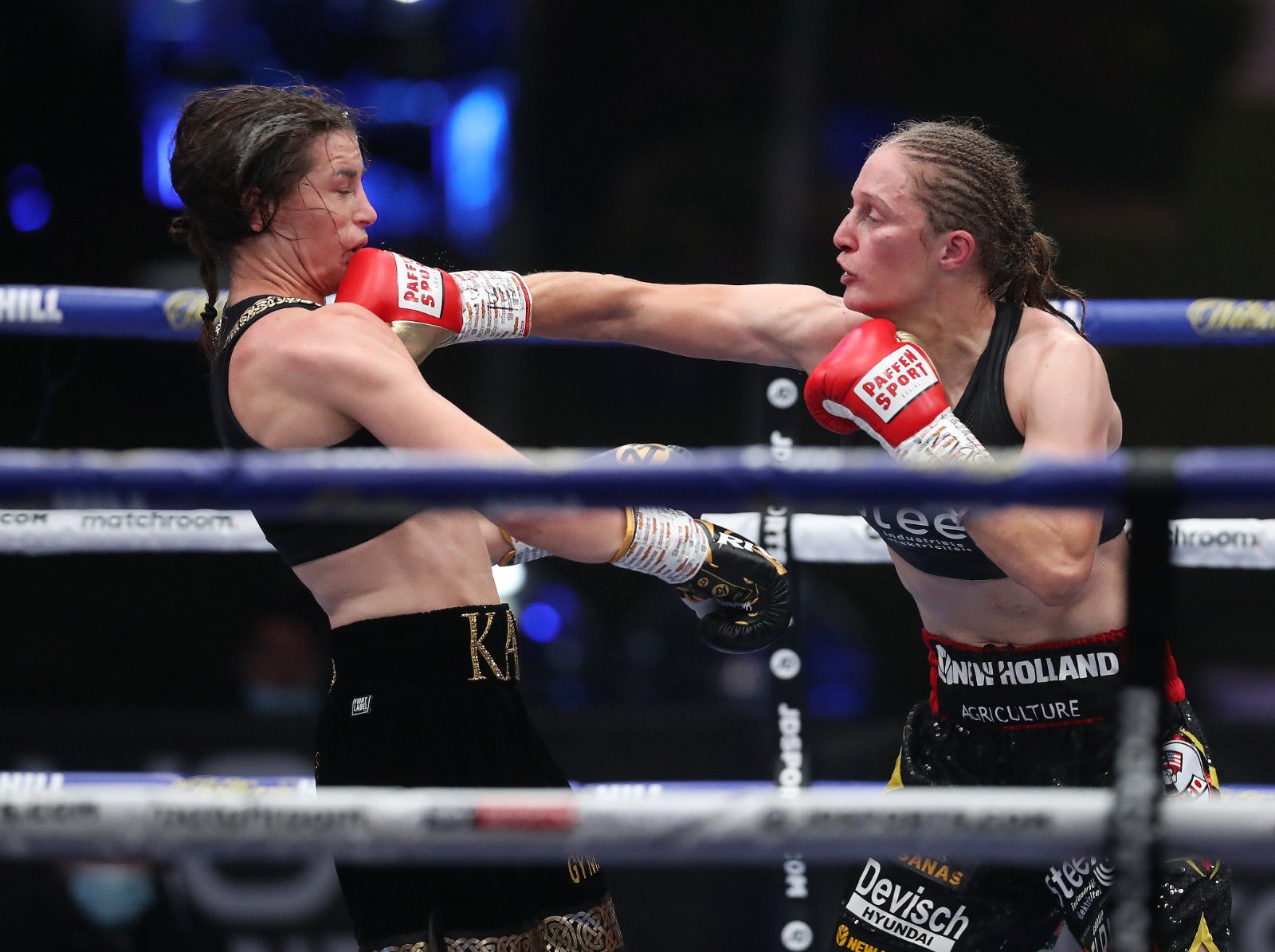 The Irish star (16-0, 6 KOs) had narrowly defeated Persoon on points in their first fight, a decision which was hotly disputed, but Taylor received a wider verdict in the return bout with scores of 98-93, 96-94 and 96-94.

On if she thought she did enough to win: “I think so. I knew it was going to be a tough battle going into this fight. It’s never going to be an easy fight against Delfine. I knew I had to dig deep at some stage during the fight but I thought I boxed a lot better than last time. I still could’ve boxed a bit more.”

On facing a relentless opponent like Delfine Persoon: It’s always going to be tough. You can’t relax at all in there against someone like that. She’s going to come and come and come. Even though I am hitting her with clean shots, she is just on the attack all the time. That’s why it is such a tough fight against someone like Delfine. But congratulations on two fantastic fights. They were an amazing two fights for women’s boxing.”

On if she silenced the critics of the first fight’s decision: “yeah, I think it was a lot more convincing tonight even though it was a tough fight. But as I said, it’s always going to be a tough fight against someone like that and you’re going to have to dig deep and show a lot of heart at some stage during the fight. But I think I did that well, I boxed well.”

On accepting the result: “Yes, this time I respect the result. For me this time, the weight was a little too much. I didn’t feel like I had enough power to hurt her this time. I tried to get my weight up but I could not hurt her this time. And if you don’t hurt her, it’s technical and she’s good at moving around. You have to hurt her otherwise she gets away. The power was not enough. I’ve got no problem with this decision and my respect she deserves.

On a trilogy: “In the second round, I think I broke my nose so it was eight rounds boxing with my nose broken. First I must repair my nose and then I think super featherweight is better for me than lightweight. My trainer pushes me to eat, eat, eat but when you train a lot, it’s too much to gain the weight. My respect to her. She deserved to win today.

Chris Kongo clinically dispatched Luther Clay in the ninth round of their WBO Global Welterweight Title battle at Fight Camp.

Kongo, managed by the event’s headliner Dillian Whyte, unleashed a flurry of punches that knocked Clay down and brought about the end of the fight.

The Bermondsey man took full advantage of his first opportunity on the big stage, extendeding his unbeaten record to 12-0 with seven knockouts.

“100%. I knew I had the speed, I had the power, I just had to go in there and pace myself. Like I said, it has been 16 months since I last got in the ring so it felt kind of new to me. In the first rounds I was trying to feel him out but then when it got into the middle rounds I hurt him. I knew before the fight ended I was going to get him out of there and that’s what I did.

“We’e been working on a lot of things. Power was one of the attributes I have been working closely on. I’ve been working closely with my strength and conditioning coaches Nathan and Tyrone, but also when we’re in the boxing gym it is all boxing based with Jim. I want to defend the belt next. Look what I did there with 16 months out of the ring. Imagine when I’m fighting regularly what I’m going to do to these guys. I have full confidence in myself. I believe that I can be one of the best contenders in the world at Welterweight. I believe that I am the best Welterweight in the division in the UK.”

Alen Babic blasted aside Shawndell Winters in the second round as the Croatian Heavyweight extended an explosive start to his professional career. Babic, nicknamed ‘The Savage’, is yet to progress into the third round in four professional bouts and he dropped Winters twice before the fight was waved off.

Winters wobbled through the remainder of the first round, but had to withstand more spiteful work in the second and the American soon wilted. Babic was hunting another early finish and the referee stepped in after another barrage dumped Winters down by the ropes.

“That was ‘The Savage’, be afraid of him,” said Babic afterwards. “That’s my alter-ego, when I go into that mental state I can do damage. I will fight these giants. Give me the biggest one you have. I knew it in the locker room. I know when I land. Every coach told me I have bombs in my hands. It is natural. This is my approach. One or two rounds. My fights won’t go past three rounds. I am different. I have a guy in mind, he’s from my country. Filip Hrgovic! He was calling me out. I don’t like him. I want to fight him.

“I’m a different breed of fighter. Old school, I don’t care about touching. I go in there and I finish people. I finished him in the second round. Parker took five rounds, I don’t need that. They say I’m small. I’m bigger than Jack Dempsey, and Jack Dempsey was a killer! Nobody can box like me. I had almost 60 knockouts in the amateurs, that’s rare. I go all in. I’m bringing something new. I’m going to go in there and I’m going to get it finished as quickly as I can.

“I just want people to love me. I don’t care about money. I was working as a doorman for nothing, for scraps. I’ve broken my hands thousands of times. Fighting on the big stage means everything to me. Hrgovic insulted me, he really insulted me. I’ll never forget that. That’s a fight I definitely want in the future and I will win.”

In the opening bout of Fight Camp Week 4 Jack Cullen battled to a controversial split decision draw with Zak Chelli following a hard-fought encounter. Both Super-Middleweights ended a gruelling 10-round fight with facial damage and the judges could not separate them, scoring it 97-93 to Chelli, 96-95 to Cullen, while the third tally was tied at 95-95.

“I’m disappointed with two of the judges,” said Chelli afterwards. “The first judge said it was 97-93, that was fair, and that’s how the fight should have gone. I’m very disappointed. It was my first fight after 11 months, so I’m happy with my performance. There was a little bit of ring rust at the start but I dominated the last half of the fight and I believe I won it.

“I’m very disappointed with the draw. I definitely deserved the win. I put all of it into it but we move on. I’m 22, as I always say. Hopefully I’ll get a Title fight in my next fight. I’m not going to lie, with 11 months out of the ring I felt the ring rust at the start, but I worked through it and I ripped him to the body, got him to the head, cut him and made him bleed.

“At least the fans enjoyed the fight, I hope they did. He took the punches, he did well. I rate him for his durability but I still believe I beat him. My dad knows the truth, he knows I won that fight. I’m not going to lose hope. I’m going to keep going and train hard. I look forward to the next fight. Hopefully it won’t be another 11 month wait. There’s a lot more to come from me.” 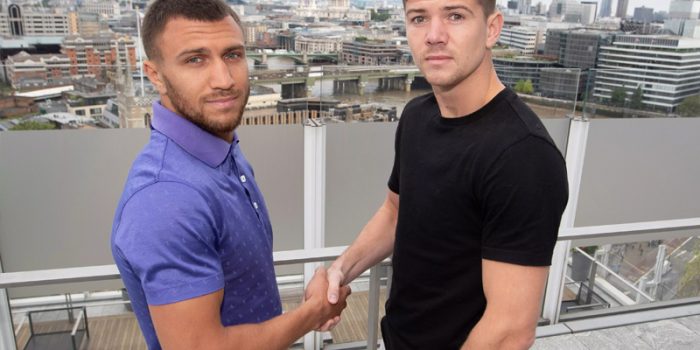 World champion Vasiliy Lomachenko is not at all worried about mixing it, on the home turf of... 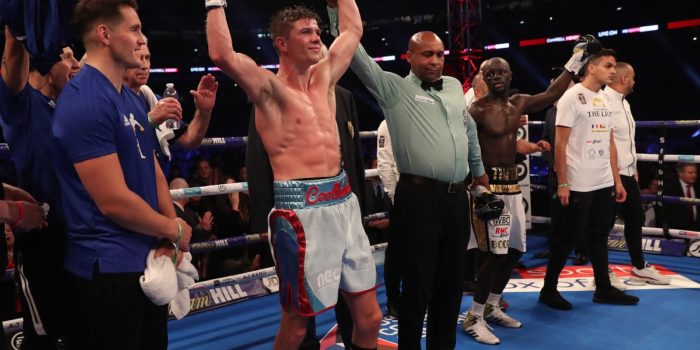 CAMPBELL TO LET WORLD TITLE ‘FRUSTRATIONS’ OUT IN PHILLY