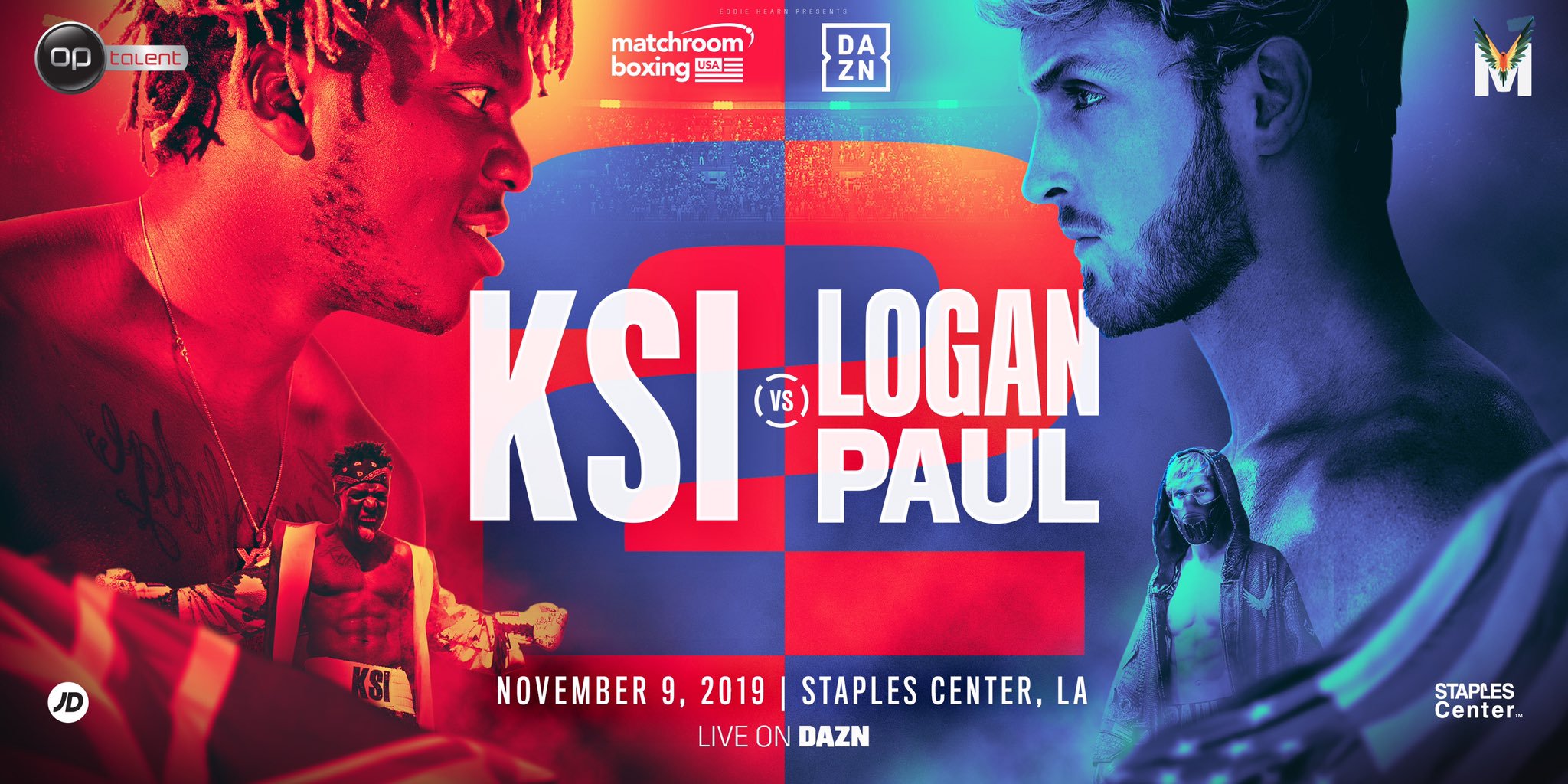 KSI and Logan Paul will clash in a rematch at STAPLES Center in Los Angeles on Saturday November 9, live on DAZN in a fight presented by Eddie Hearn for Matchroom Boxing USA in association with OP Talent.

The YouTube rivals clashed in August 2018 at the sold-out Manchester Arena in Manchester, England and was watched by over 1 million live pay-per-view buyers on YouTube, with the fight ending in a majority draw with KSI edging the battle on one card with two judges unable to split them.

Now the pair meet once again to settle the score in the ring with Paul welcoming his rival to his LA backyard, and this time they do so as professional fighters having passed their relevant medicals last week, and they will come face-to-face for the first time since their fight at a launch press conference in Los Angeles on Saturday September 14 with a UK press conference to follow.

The larger-than-life internet stars with over 40 million YouTube subscribers between them have been itching to get their hands on each other once again, as have their loyal armies of fans, and now the countdown begins to their second night in the boxing spotlight.

“Finally, after over a year since our rematch, I get to enter the ring once again to fight Logan Paul,” said KSI. “If I’m being honest, I didn’t fight well at all in the first fight, and even then, I still managed to draw against him.

“This time I won’t make it so close, especially now that it’s a pro fight, no head guards and 10oz gloves hahahaha, the time to end him is nearing. I can’t wait to see the memes of him slumped on the ground after I’ve repeatedly beaten the life out of him. He’s facing a different animal this time. He will soon realize.

“Big shoutout to DAZN and Matchroom Boxing USA for hosting a monumental fight that will be in the record books whether people like it or not. November 9 is the day ‘The Nightmare’ becomes his reality.”

“I’m excited to ruin JJs face and I want to thank DAZN for giving me the platform to do so,” said Paul. “Last fight, KSI couldn’t beat me with only three months of training under my belt. For the past year, while JJ has been wasting his time trying to become a rapper, I’ve been training every single day. I’m finally getting what I wanted from the beginning – no headgear, 10oz gloves, and the opportunity to dismantle JJ’s repugnant face in Los Angeles, my home city.

“After November 9, the embarrassment of losing will eat away at KSI’s ego for the next decade; he will be afraid to show face in America. This time, I won’t leave it up to the judges.

“I’ve been a DAZN fan for a very long time, so it’s an honor to partner with DAZN and Matchroom Boxing USA for what will become the biggest combat sporting event of the year.”

“It’s an incredible and groundbreaking deal for the fighters and also DAZN,” said Liam Chivers, Managing Director & Founder of OP Talent and manager of KSI. “The deal will cover global rights, distribution, promotion and appearance commitments for the fight”.

Chivers explains “A no risk, high budget, secure platform deal had to be achieved. I wasn’t going to risk broadcast on an unstable or unsupportive platform and have cost and piracy risk put on KSI. So, spending ten months working to get the broadcaster and rights terms in place first was essential. DAZN of course also brings a top-class live sporting event production to subscribers of their service, which is part and parcel of the deal.  In addition, having the support of the world’s leading boxing promoters in Matchroom Boxing, this is a major step up and mainstream cross over. A significant deal on many levels.

“I spoke to the world’s leading platforms and top sporting broadcasters regarding the fight and what deals were possible. But after many meetings and discussions, the DAZN subscription model was clearly the best option of all and the one I therefore pursued the hardest. Subscribers to DAZN not only get this fight brought to them but an array of other great sporting events and pro fights in the same month for no additional fee. The value to fans isn’t matched anywhere else”.

“The first fight was the largest live PPV sports event in the history of the internet,” said Jeff Levin and Paolo Moreno, managers of Logan Paul. “We are excited to be partnering with the best brands in combat sports in Matchroom Boxing USA and DAZN for the rematch. STAPLES Center will be rocking on November 9.”

“13 months ago when the first fight took place I smirked and pondered how embarrassing it would be to stage this event in a 20,000 seater arena,” said promoter Eddie Hearn. “What I saw was a phenomenon; a sold out arena, over one million PPV buys but more importantly an energy of a new audience to the sport of boxing.

“When I was asked to be involved in the rematch it got me excited but I had some requests to help integrate the two audiences. I requested that both fighters turn professional and undergo the same medicals that any other fighter would. I asked that the fighters lose the headguards and use 10oz gloves, if we are going to do this then let’s do it properly.

“Both men obliged and now they prepare for war on November 9 – this event will be huge, a World championship card beneath an event that will create a hype for boxing not seen in the US for a long time. STAPLES Center will be sold out and a new audience will join our great sport and tune in live on DAZN.”

“We look forward to hosting this historic night of boxing here in Los Angeles at STAPLES Center,” Lee Zeidman, President, STAPLES Center, Microsoft Theater and L.A. LIVE. “KSI vs. Logan Paul II will be incredible night of boxing and we are excited to work with Matchroom Boxing USA for the first time as we begin our 20th Anniversary year long celebration this fall.”

“DAZN is excited to team up with KSI, Logan Paul and Matchroom Boxing on such a unique event,” said Joseph Markowski, DAZN EVP, North America. “Both men have enormous fan bases and we look forward to bringing best-in-class production and programming to this new group of potential DAZN subscribers around the world.” 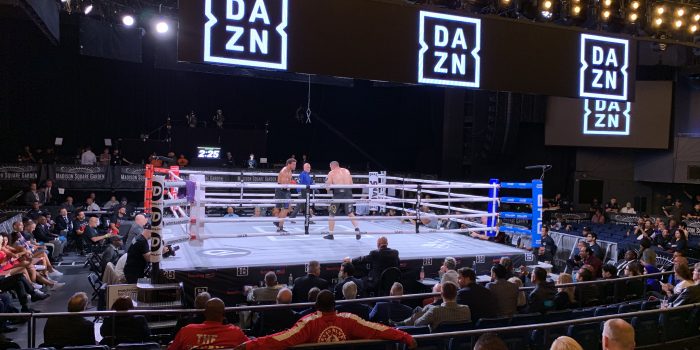 After HBO closed shop on its boxing Program in late 2018, a few networks saw... 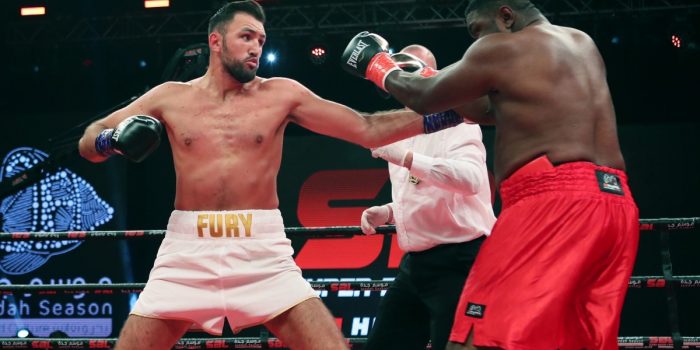 British heavyweight Hughie Fury will face Alexander Povetkin on the undercard of the lightweight world...