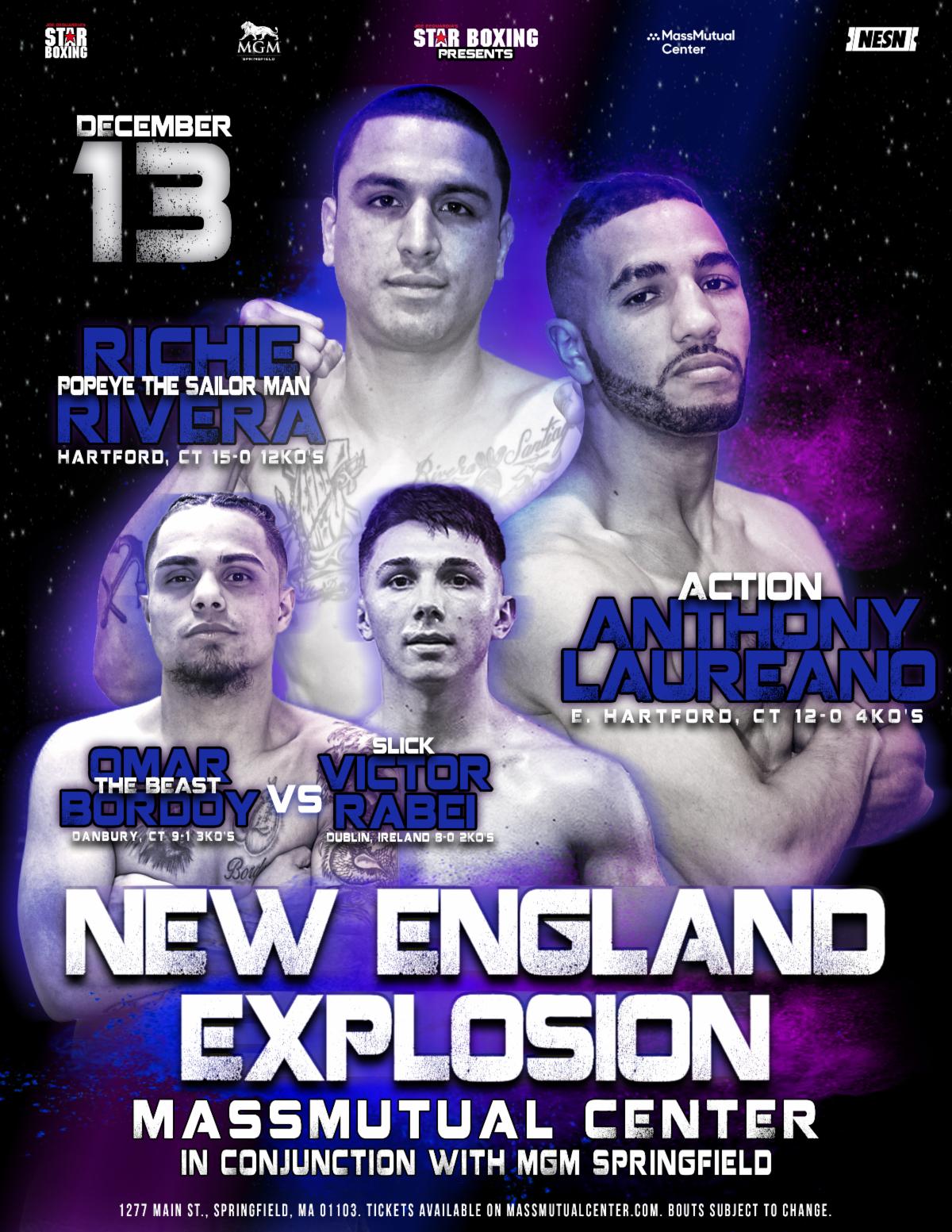 11/26/2019 Boxing Action Magazine Headline News
Springfield, Mass. (November 26, 2019) – Star Boxing is pleased to announce its “New England Explosion” coming to theMassMutual Center in December. Sponsored by MGM Springfield, this spectacular night of boxing will showcase the best talent in New England including 2018 Connecticut Boxing Hall of Fame Fighter of the Year,  “ACTION” ANTHONY LAUREANO (E. Hartford, CT 12-0 4KO’s), heavy-handed light heavyweight, RICHIE “POPEYE THE SAILOR MAN” RIVERA (Hartford, CT 15-0 12KO’s) and OMAR “BEAST” BORDOY (Danbury, CT 9-1 3KO’s). New England Explosion will be on the famed date of thrillers, Friday, December 13, 2019 at 7:30 pm in MassMutual Center’s Exhibition Hall.
Tickets are on sale now at www.MassMutualCenter.comand at the MassMutual CenterBox Office. Tickets start at $40. Pricing does not reflect facility fees or convenience charges.
NESN’s live 2-hour broadcast of the feature bouts will begin at 9 p.m. with Jahmai Webster calling the action and Dana Rosenblatt (37-1-2 in his professional boxing career) as the analyst.
Laureano looks to conclude an extremely busy 2019, with his fourth fight of the year. Kicking off in January, Laureano dropped Ronald Rivas twice, earning a dominant unanimous decision victory. In June, Laureano returned in a barn burner against Dieumerci Nzau a fight that had the crowd on its feet from beginning to end. Laureano earned the 7thround TKO, securing the ABO America’s Title. Finally, in September, Laureano stepped in against Brian Jones, putting his ABO title on the line in his toughest test to date. However, Laureano proved to be up to the task, bringing his quintessential “action” fighting style and dominating the Texan over 8-rounds for the victory.
Laureano is ecstatic to be returning home to the very building where he won the New England Golden Gloves in 2016, to showcase his skill in front of his hometown fans on December 13, stating, “I’m blessed to be back! I won the Golden Gloves here and those memories I really hold dear to me. The Golden Gloves really helped me get to where I am today. I’ve always had huge support from Massachusetts and to me this is a homecoming. I’m honored to be back! Can’t wait!”
Rivera has fought an astonishing six times in 2019 and looks to close out the year with yet another victory. Rivera has racked up the miles this year, having fought in Charlotte, North Carolina, Tijuana, Mexico, Catskills, New York and most recently Daytona Beach, Florida. Most notably, “Popeye” Rivera went to battle with banger Brian Howard in June, over 8-rounds for the ABO America’s Title. After being hurt in the first round, Rivera settled in, out boxing the Georgia product in Howard, earning the unanimous decision victory. In September, Rivera defended his ABO title for the first time against yet another banger, Israel Duffus. Both men came out of the gate with bad intentions, yet Rivera eventually gained and remained in control of the bout over the 8-round contest, winning again.
After traveling for most of 2019, Rivera is ready to show up and show out in front of his hometown fans, “I am super excited to be able to fight in my own backyard! I have been doing a lot of traveling, fighting around the world, trying to put my brand out there. However, it is a special feeling to be able to fight in front of my friends and family. I cannot wait.”
Also being featured on December 13, of Danbury, Connecticut, Bordoy will be in his toughest task to date against the undefeated “SLICK” VICTOR RABEI (Dublin, Ireland 8-0 2KO’s). Bordoy is no stranger to wars, such as when he took on then undefeated, Terrell Bostic at Star Boxing’s “Rockin’ Fights,” where he dropped Bostic, which proved to be the difference in the bout, winning by split decision. Rabei is a Maldivian born, Dublin resident, who fights as his moniker insinuates. “Slick Vic” will cross the Atlantic Ocean for the first time, to battle with Bordoy.
Star Boxing CEO JOE DEGUARDIA had this to say about the New England Explosion, “We look forward to bringing a thrilling night of boxing to the boxing fans in the Springfield, Massachusetts area. New England is in for a treat, so much talent has come out of the area over the years. Willie Pep, Rocky Marciano, Marvin Hagler… the list goes on. We are excited to bring these hungry undefeated and exciting prospects to the MassMutual Center with MGM Springfield. With rising talent like Anthony Laureano, Richie Rivera, and the sensational undercard planned, December 13 will be everything New England boxing fans want and more.”
Share: 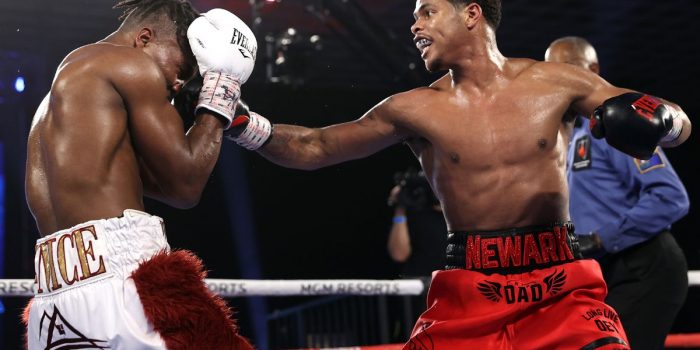 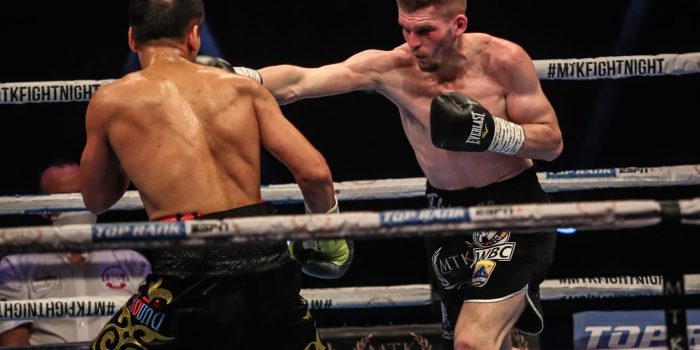 Macaulay McGowan has promised to go to war with MTK Global stablemate Kieron Conway when...