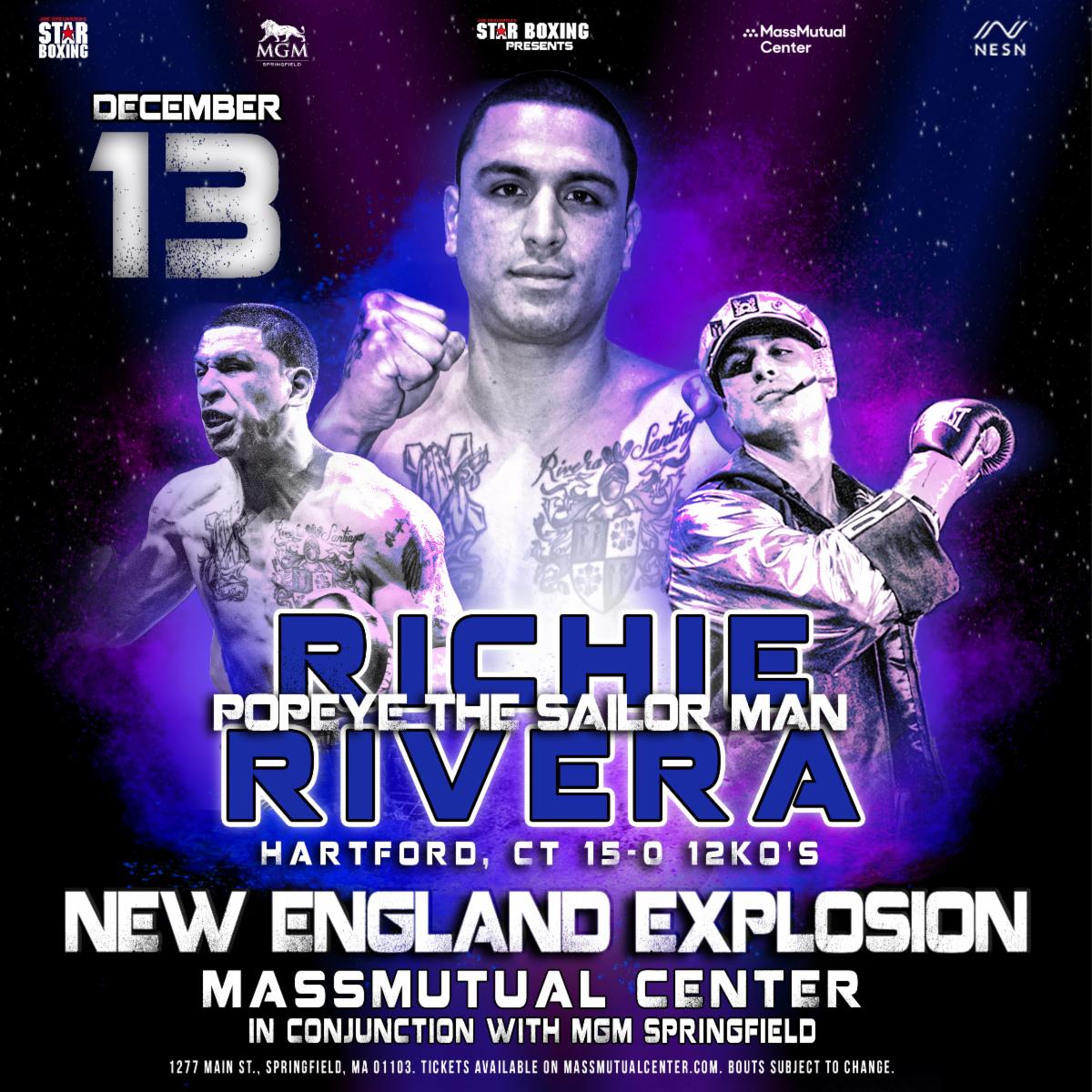 12/02/2019 Boxing Action Magazine Headline News
SPRINGFIELD, Mass. (December 2, 2019) — New England’s most powerful puncher and one of the area’s most popular pro boxers, undefeated RICHIE “POPEYE THE SAILOR MAN” RIVERA (15-0, 12 KOs), returns to the ring Friday, December 13 on “New England Explosion”, presented by JOE DEGUARDIA’S STAR BOXING, at MassMutual Center in Springfield, Massachusetts.
“New England Explosion,” sponsored by MGM Springfield, will air live for the first time on New England Sports Network (NESN), starting at 9 p.m. ET / 6 p.m. PT.  The home of the Boston Bruins and Boston Red Sox, NESN is available nationally on a sports subscription basis.
Rivera will be fighting near his Hartford, Connecticut home (25-minute drive) for the first time in 1 ½ years.  The charismatic Rivera, whose “Popeye” persona has endeared him to fans everywhere, has already fought six times in 2019, expanding his growing fans base in Mexico, Florida, and New York (two fights in each), plus North Carolina.
“I’m thrilled to be fighting in my backyard again,” Rivera said.  “To get the job done I take each fight like it’s my hardest.  I feel like this will be an exciting victory for me.”
“I believe that I’ll be just as busy in 2020 as I’ve been this year.  I want to keep fighting a lot for fans to think of me as one of the most active fighters in the game.”
Rivera will take on cruiserweight “MIGHTY” JOE JONES (11-1, 8 KOs), fighting out of Leesburg, Virginia, in the 8-round, co-featured event. Rivera was able to enjoy a traditional Thanksgiving Day meal, because he’s fighting as a full-fledged cruiserweight (200 lbs.), rather than in his natural 175-pound light heavyweight division, or the 185-pound catchweight he’s fought at so many times.
“I’m going up in weight,” he noted, “so I didn’t have to hold back on turkey. I figure that the light heavyweight division is slowly picking up, but that the cruiserweight division is on a dying cycle.  I’m going to make a name at cruiserweight before dropping down to my regular weight (light heavyweight) and I can out-punch any light heavyweight. I’ll continue to train hard and eat well, as always, but still bring my power to cruiserweight.
“This is a huge fight for Richie,” his head trainer TONY BLANCO  commented.  “Fighting a good, quality opponent who is a natural cruiserweight will be his toughest test to date.  Jones is a solid pro, young (24), and he packs a good punch.  An impressive victory for Richie will open doors for him to make a big splash in 2020.  We’re right there at the door.
“I think Richie will be able to climb the ladder (ratings) faster as a cruiserweight than light heavyweight.  He’s going to bring excitement to the cruiserweight division and make his mark there before easily going back to light heavyweight.”
“Richie Rivera is an exciting prospect and I look forward to his fight on December 13that the MassMutual Center in Springfield, Massachusetts.  The fans are in for an exciting fight in the ring, and his ‘Popeye’ persona is also entertaining”, stated JOE DEGUARDIA, President of Star Boxing.
The Rivera vs. Jones bout will be co-promoted by Hartford Boxing Promotions, which is owned and operated by Rivera, Blanco and MICHAEL TRAN.
Blanco and Rivera agree that “Popeye” has gained invaluable experience sparring the past year with his stablemate and one of the many stars of Star Boxing, union worker and former WBC International light heavyweight champion JOE SMITH, JR.(Mastic Beach, Long Island, 24-3, 20 KOs),  who is training for his January 11thshowdown in Atlantic City versus JESSE HART(26-2, 21 KOs) on ESPN.
“I love working with Joe,” Rivera added.  “He has tremendous power.  Joe’s a light heavyweight  who definitely has pop.  If I can take Joe’s punches, I can’t think of a better way for me to get ready to fight a good cruiserweight.  Every time I spar with Joe – right now, about once a week – it’s a learning experience for me.”
Rivera is part of a Nutmeg State triple-header in Springfield. East Hartford super lightweight “ACTION” ANTHONY LAUREANO (12-0, 4 KOs) returns home in an 8-round tilt against ANGEL “AZTEC WARRIOR” HERNANDEZ (17-14-2, 11 KOs), while Danbury super lightweight OMAR “THE BEAST” BORDOY (9-1, 3 KOs) steps up to take on Dublin, Ireland’s undefeated “SLICK” VICTOR RABEI (8-0, 2 KOs) in what will be Bordoy’s first scheduled eight-round bout.
Share: 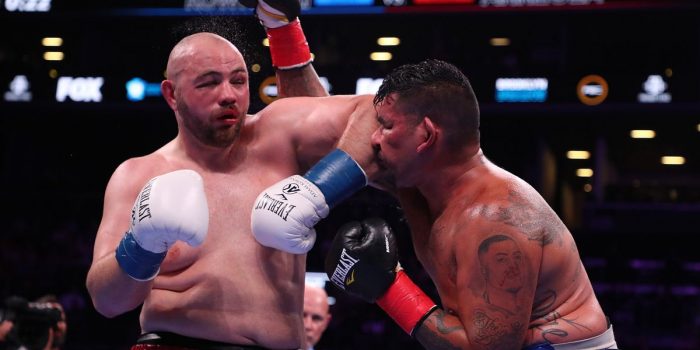 By Kenneth Bouhairie The undefeated contender takes a huge step toward a world title shot,... 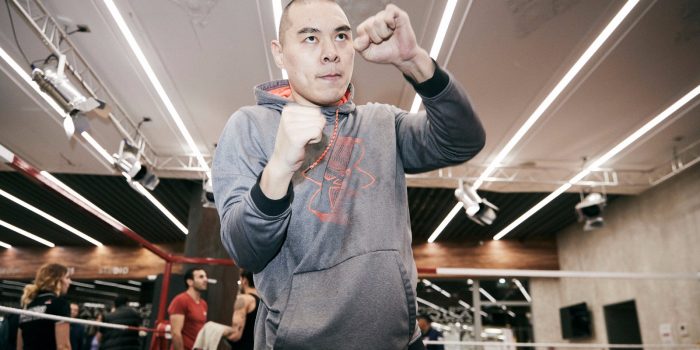 ZHANG PROMISES TO RETURN WITH A BANG