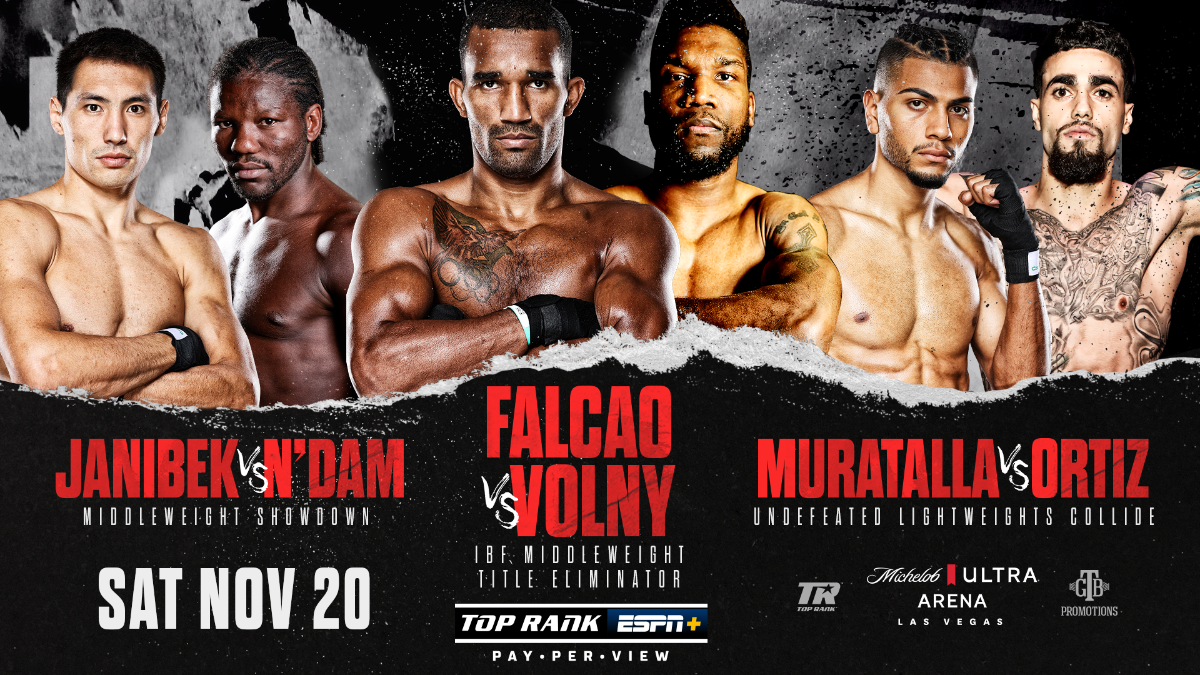 LAS VEGAS (Nov. 4, 2021) — There will be plenty of fistic reinforcements Saturday, Nov. 20at Michelob ULTRA Arena at Mandalay Bay in Las Vegas.

Presented by Top Rank and TGB Promotions, Crawford-Porter will be a Top Rank PPV exclusively on ESPN+ in the United States at 9 p.m. ET/6 p.m. PT.  Limited tickets are still available and can be purchased by visiting AXS.com.

Falcao (28-0, 20 KOs) is a seven-year pro who signed with Top Rank following the 2012 Olympics. The 31-year-old southpaw has steadily climbed the world rankings and has knocked out five straight foes dating back to 2019. In his last outing, he stopped former world title challenger Artur Akavov in four rounds. Volny (16-0, 10 KOs), from Montreal, Canada, has fought all his pro fights in his home country and is coming off a March knockout over noted tough man Janks Trotter. The winner of Falcao-Volny will be in line to fight for the title currently held by Gennadiy Golovkin.

“I have waited for an opportunity like this for a long time, and I will grab it with both hands,” Falcao said. “I have an Olympic medal, and now it’s time to add a professional world title to my trophy case.”

Volny said, “I had several major opportunities fall through, but I am ecstatic that the fight with Falcao is happening. It won’t be an easy fight, but I have been training for a long time, and I will do whatever it takes to earn my shot at the title.”

Alimkhanuly (10-0, 6 KOs) is ranked the No. 2 middleweight by the WBO and coming off his signature win, an eighth-round stoppage over former world champion Rob Brant. From Zhilandy, Kazakhstan, the 2016 Olympian has knocked out four straight opponents dating back to April 2019. N’Dam (38-5, 21 KOs), a 17-year pro from Cameroon, held the WBA middleweight world title in 2017 and challenged for world titles on three other occasions. After a pair of defeats at super middleweight, N’Dam returns to the middleweight ranks, where he most recently defeated the formidable Martin Murray via majority decision.

Muratalla (12-0, 10 KOs), from Fontana, California, has risen to prominence fighting out of the famed Robert Garcia Boxing Academy in Riverside, California. He last fought on the Josh Taylor-Jose Ramirez card in May, knocking out Jose Gallegos in five rounds. Ortiz (12-0, 3 KOs), from Philadelphia, has made a habit of knocking off undefeated prospects. In his last six fights, he has defeated four undefeated fighters, including a unanimous decision over the 14-0 Jeremy Hill in March.

Dogboe (22-2, 15 KOs) has revitalized his career since back-to-back title fight losses to Emanuel “Vaquero” Navarrete. After a comeback knockout over Chris Avalos, he bested Adam Lopez by majority decision in June. Diaz (26-3, 16 KOs) is a two-time world challenger coming off a 12th-round TKO loss in a bid for Navarrete’s WBO featherweight world title. The Puerto Rican veteran had won two bouts as a featherweight entering the Navarrete fight and hopes a win over Dogboe leads to a third crack at world title glory.

“I’m excited for this challenge, a massive opportunity to get closer to becoming a two-division world champion,” Dogboe said. “This is a fight the fans won’t want to miss. I know Christopher is tough, but I’m stronger, tougher, and smarter. I’d like to commend everyone at Top Rank for making this fight possible and to Diaz for accepting the challenge. I always want to give the fans something to remember. That’s why I leave it all in the ring.”

Diaz said, “I’m coming back, and I’m very excited about fighting on a great stage like Crawford vs. Porter. Dogboe is a solid fighter who only has two losses against Navarrete. We both have a lot to give to boxing. The fans already know what to expect every time I get in the ring. I’m sure this fight will steal the show on November 20.” 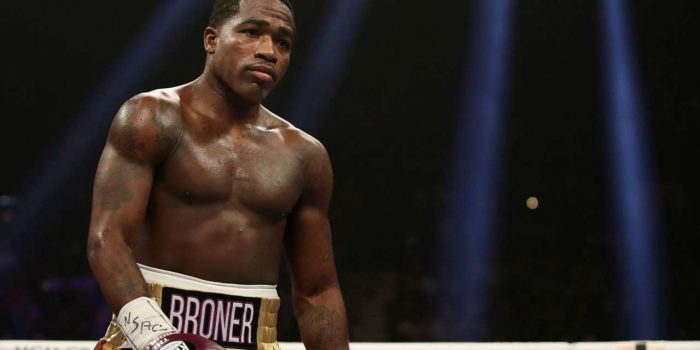 Broner Sleeping in Bed he Made 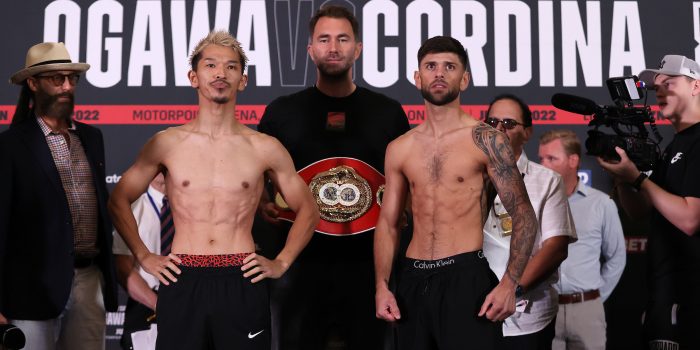 OGAWA VS. CORDINA WEIGHTS AND RUNNING ORDER 16:45 BST FIRST FIGHT LIVE ON BEFORE THE BELL 4...