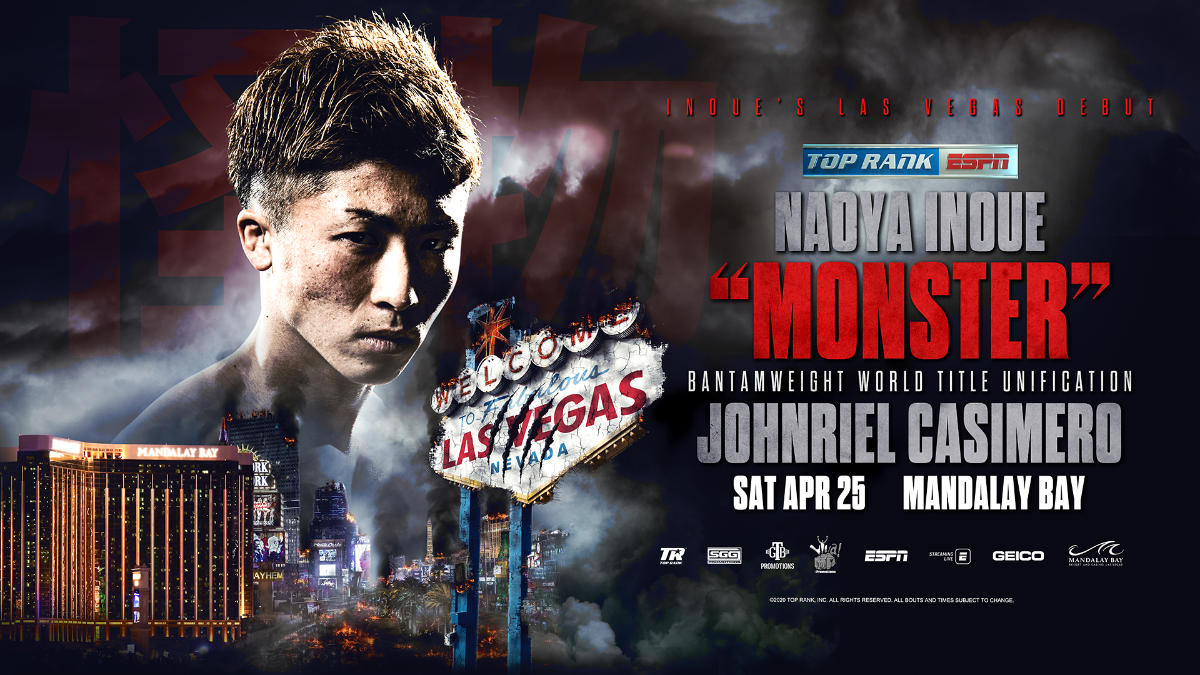 Inoue is coming off a memorable decision in the 2019 Ring Magazine and ESPN.com Fight of the Year against future Hall of Famer Nonito Donaire. This will be Inoue’s first bout under his long-term promotional agreement with Top Rank.

Inoue-Casimero and the 10-round bantamweight tilt featuring WBO No. 1 contender Joshua “Don’t Blink” Greer Jr. and WBO No. 2 contender Jason Moloney will stream LIVE on ESPN+ beginning at 9 p.m. ET. In the final undercard bout on the ESPN+ stream, former super featherweight world champion Andrew Cancio will take on Tyler McCreary in a 10-rounder.

“The ‘Monster’ is coming to Las Vegas, and we couldn’t be more excited,” said Top Rank chairman Bob Arum. “He is a generational talent, a fierce competitor who is ready to take the United States by storm. Casimero is a seasoned champion, and Inoue knows he’s in for a firefight at Mandalay Bay.”

Inoue (19-0, 16 KOs), 26, won his first title in only his sixth pro fight, knocking out Adrian Hernandez to win the WBC light flyweight crown. He is 14-0 with 12 knockouts in world title bouts, as he defended his light flyweight title once before moving up two weight classes to knock out long-time WBO junior bantamweight world champion Omar Narvaez in two rounds in December 2014. He defended that belt seven times before setting his sights on the bantamweight division. His first three bantamweight title bouts lasted a total of four rounds, as he catapulted up pound-for-pound lists with stoppages over Emmanuel Rodriguez and Juan Carlos Payano. The Donaire bout — the final of the World Boxing Super Series tournament — was the ultimate gut check, as he suffered a broken orbital bone before prevailing in an instant classic.

“It is a tremendous honor and a dream come true to headline a card in Las Vegas against a great fighter like Casimero,” Inoue said. “It is my goal to be the undisputed bantamweight king, and I am coming to America to put on a great fight for the fans. I would like to thank Mr. Bob Arum and MGM Resorts for making my Las Vegas dream a reality. Now, the work begins, and I will kick off my 2020 schedule at Mandalay Bay in devastating fashion.”

Casimero (29-4, 20 KOs), from Ormoc City, Philippines, is a newly minted bantamweight world champion who upset South African southpaw Zolani Tete via third-round TKO last November in Birmingham England. A world traveler, Casimero has won world title bouts in Mexico, England, China, Panama and the Philippines, in addition to interim world title bouts in Argentina, Nicaragua and the United States. He is on a five-bout winning streak and is in his physical prime at 29 years old. The Inoue-Casimero winner will be one belt shy of completely unifying the division, as WBC world champion Nordine Oubaali holds the final piece of the championship puzzle.

“This is my dream fight. I have traveled the world and fought in 10 countries. I’ve won world titles at 108, 112 and 118 pounds,” Casimero said. “But ever since I saw my hero and fellow countryman, Senator Manny Pacquiao, fight in Las Vegas, that has been my dream. To everyone who thinks I am the underdog on April 25, I will shock the world and show the fans who the real ‘Monster’ is in the ring.”

Greer (22-1-1, 12 KOs) has won 19 fights in a row, but as he heads into the most significant bout of his career, he’s made a significant change. After seeing his seven-bout KO streak ended with a pair of close decisions over Nikolai Potapov and Antonio Nieves, Greer has moved his training base from Southern California to his hometown of Chicago. He has reunited with former trainer George Hernandez and is training at Garfield Boxing Gym, the place where he developed from amateur standout to promising professional. With a world title shot in his sights, Greer is not taking chances.

“I know what I’ve done before, and I know that I’m capable of,” Greer said. “George is the perfect man for the job. We have great chemistry. I love being back in the gym with him. This is what separates the boys from the men. I’m just ready to show the world who I am. At Garfield, the young kids keep me hungry. They don’t care about my ranking or that I’ve fought on ESPN. Chicago keeps me humble. Thanks to Moloney for taking the challenge, and I look forward to getting busy April 25.”

Moloney (20-1, 17 KOs), from Australia, will be fighting for the second time away from home as he seeks a second world title shot. He fought for the IBF bantamweight world title in October 2018 in Orlando, Fla., dropping a split decision to Emmanuel Rodriguez. Moloney has fought three times since, securing a trio of knockout wins during a successful 2019. In his last bout, he blitzed Dixon Flores in two rounds on an ESPN+-streamed card that also featured his twin brother, 115-pound interim world champion Andrew Moloney.

“I’m extremely grateful for this big opportunity. Fighting in Las Vegas has been a dream of mine for many years, and I’m looking forward to having a very impressive win over Joshua Greer Jr. and moving another step closer to becoming world champion,” Moloney said. “April 25 is a very important day for us in Australia and New Zealand called Anzac Day. It is a day of remembrance, where we pay our respects to all those who have served and died for our beautiful country. I will do whatever it takes to win this fight, and I will dedicate this victory to all those who have served for us.”

Cancio (21-5-2, 16 KOs) had a dream start to 2019 when he knocked out Alberto Machado in February to win the WBA super featherweight world title. He stopped Machado in three rounds four months later, but he was dethroned in November via seventh-round knockout by Nicaraguan veteran Rene Alvarado. McCreary (16-1-1, 7 KOs), from Toledo, Ohio, is looking to bounce back from a unanimous decision defeat last November to former two-weight world champion Carl “The Jackal” Frampton.

“I’m very excited to start my next chapter with Top Rank on April 25 against Tyler McCreary at Mandalay Bay in Las Vegas and on such an outstanding card,” Cancio said. “I know how formidable an opponent McCreary is, but I’ll be more than ready to be victorious and put on a great show for the fans when I return to battle.”

“It’s another big opportunity, something I couldn’t pass up,” McCreary said. “He’s a former world champion, but he’s no Carl Frampton. This is a steppingstone for bigger fights. I have to get past him to see the bigger names. I learned a lot from the Frampton fight, and that experience is the number one teacher for me.” 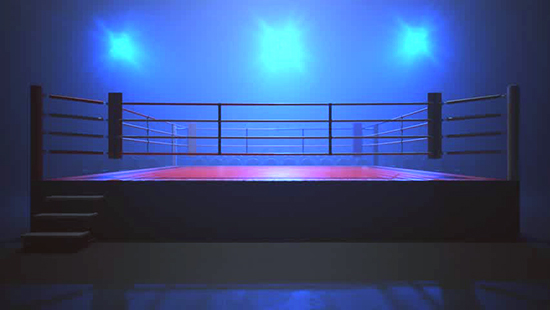 Boxing Event in Pittsburgh This Saturday

Live championship boxing returns to The Event Center at Rivers Casino in Pittsburgh, PA for... 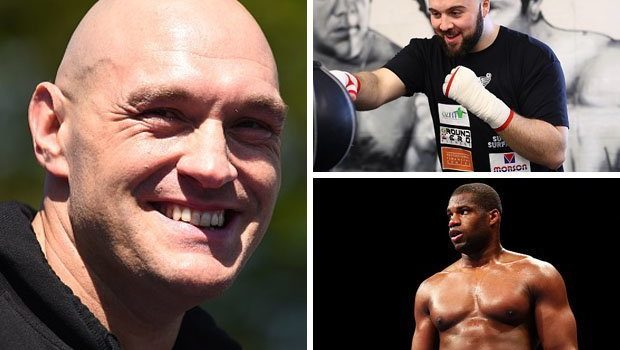