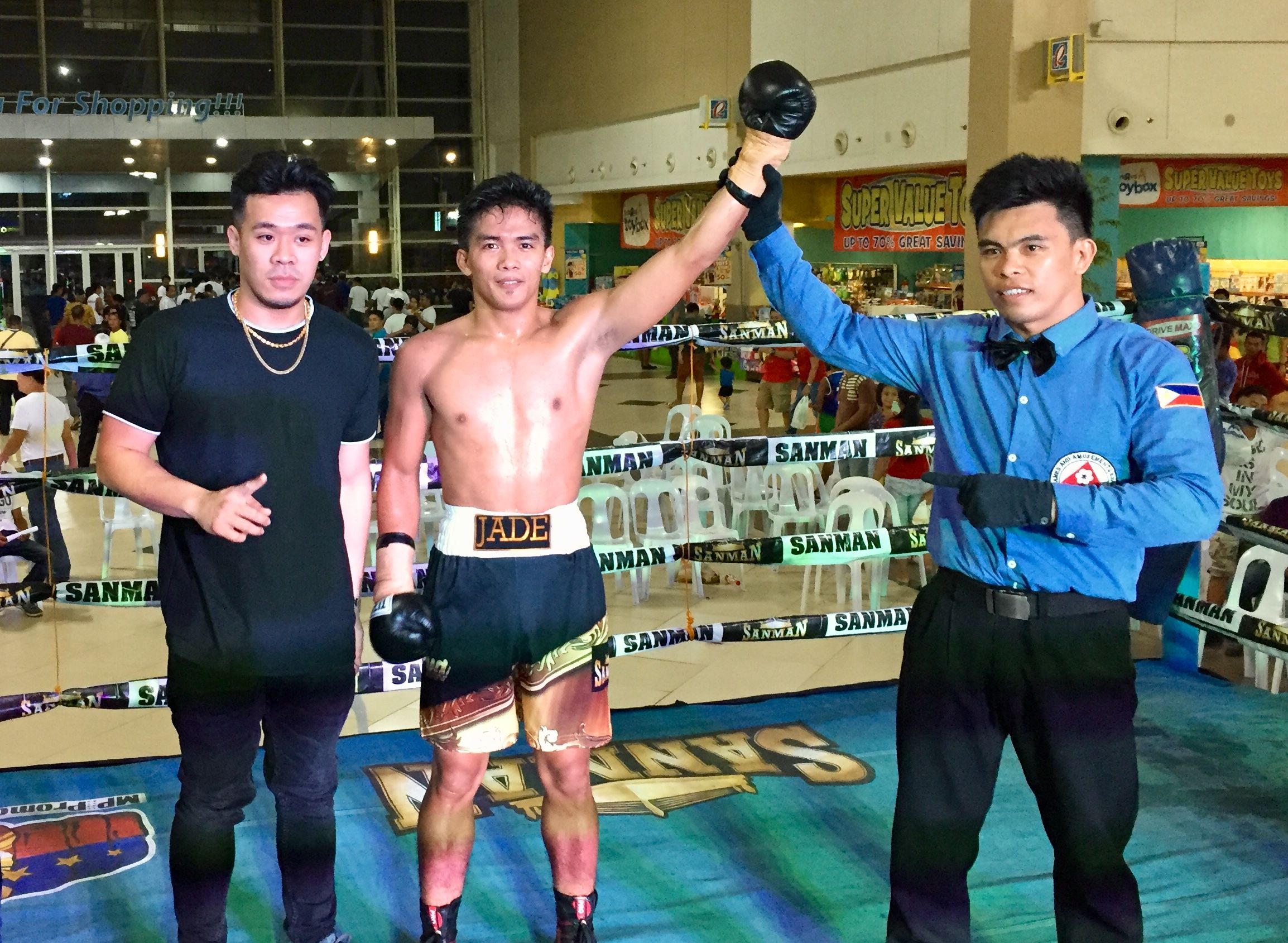 04/30/2019 Boxing Action Magazine Headline News
By Carlos Costa
GENERAL SANTOS CITY, Philippines   —   There were 12 fights and there were 12 explosive knockouts in Sanman’s Boxing Show Tuesday Evening at Robinsons Place here in Gensan.   Several of the knockouts were fantastic body shots.  Fans loving every minute.    Sanman’s “Brawl at the Mall 12” was a thrilling success.
In the main event, sensational Filipino knockout artist “The Hurricane” Jade Bornea (14-0, 10 KO’s) brutalized Zamboangueño Jonathan Francisco (10-11-1, 4 KO’s) stopping him in two rounds.
From the getgo, the unbeaten bantamweight made perfect use of his superior fighting skills, allowing a heavy rain of leather to pour over the brave Francisco, mercilessly ravaging his mid-section, dropping him to the blue canvas, castigating him till the uneven combat was thankfully halted.
Way too powerful was Jade Bornea over his opponent, his knock out win satisfying his growing number of fans, and the 23-year-old warrior is ready for more challenging missions.
In the co-feature, super bantamweight WBC Asian titlist “Magic” Mike Plania (20-1, 11 KO’s) vaporized unheralded southpaw “The Destroyer” Calamba of Butuan, rocking him four times to the floor in the opening chapter, and one more time in the following stanza en route to a TKO win in chapter two.
Plania looked sharp and crushing, cruising with easy over his veteran opponent, and the fans want to see more “Magic.”    The referee for the clash was veteran Alberto Heramil of Polomolok,
VINCE PARAS BACK TO THE WINNING CIRCLE

Former world-title challenger Vince Paras (14-2, 12 KO’s) of Gensan, weighing 112 pounds, stopped in seven chapters 24-year-old “Machine Gun” Reymark (9-9-1, 4 KO’s) of Binan, Laguna.    and hopeless, just did not want to keep on fighting, opted for staying in his corner.
The victory puts Paras back in the winning column after consecutive losses last year to world-class fighters Hiroto Kyoguchi (12-0, 9 KO’s) and Jonathan Taconing (28-3-1, 22 KO’s).
Paras’ knock out triumph is commendable and serves well the purpose of getting him away from defeats, but for some unknown reason, the highly-skilled Paras looked just three quarters the fighter he was in 2017 when he caught the eye of boxing fans in the Philippines.
Tonight, Paras, 20, looked without his usual good timing and distance, missing a lot of blows that went lost into the air.  He also lacked the usual damaging power in his blows.
His known mobility was nowhere to be seen and he even took some hands from Taday, a man without a third Paras’ credentials.   That is why fans hope that for his next fight, “El Latigo” Paras would regroup, make editions and get back in top form.
MORE EXCITING AT BRAWL AT THE MALL 12
In the only international battle of the 12-bout card, 25-year-old Sanman lightweight Guillaume Lorenzo (3-3, 1 KO’s) from Perpignan in southern France punished wild-puncher Ronel Petras (3-4, 1 KO) for a TKO victory in round 2.

From the beginning of hostilities, the taller Frenchman proved to be the superior warrior, landing combinations on Petra till his demise in the second chapter.

Moreover, tall Cebuano former GAB champion James Bacon (22-3, 15 KO’s) rocked Jiovany Rota (9-16, 6 KO’s) of Butuan with an enormous, destructive left hook to the liver that completely gassed out Rota during the vicious action of round one.

It was a fast TKO victory for the experienced James Bacon who fought at 146.   However, it seems that the man from the Queen City of the South is more suited for either the super lightweight or the lightweight divisions.
In another short-lived war, southpaw Rogelio Jun Doliguez (24-4-2, 17 KO’s) of Sarangani Province ravaged Alvin Bais (15-16-1, 4 KO’s of Cotabato del Sur with a violent attack to the body for one TKO win.
Doliguez  —  who was three pounds lighter than late-sub Bais   —   now feels ready for more challenging opponents.
more, former Amateur World Youth Champion Pitt Laurente (1-0, 1 KO) was successful in his pro boxing debut dealing a severe stoppage to unheralded late-sub Renjie Diagan (0-5, 0 KO’s).
Pitt Laurente, fighting out of the JDM boxing stable, fought in the super featherweight division.
MORE KNOCK OUT RESULTS FROM GENSAN

Plus, unbeaten, promising bantamweight Johnriel Castino (5-0, 3 KO’s) from the Paradise Island of Bohol delivered a fast and complete symphony of leather to unheralded Paulo Perono (3-17-1, KO’s) of Cotabato del Sur for an effective KO win in the opening stanza.
Castino of the Gym was far the higher-level boxer, controlling in every aspect till the end of actions due to a crushing body shot.
Furthermore, with a one-punch knockout, debutant super flyweight Criz Russu Laurente (1-0, 1 KO), younger brother of Pitt Laurente, overpowered unheralded Ramie (1-10-1, 0 KO’s) of Misamis Oriental for a quick exciting TKO win.  It was his first victory and first knock out in pro boxing, his fans wishing that many more victories are just waiting for him.
Plus, Regie Mananquil (2-1, 1 KO), living and fighting out of Gensan smashed 23-year-old Junrex Saldivia (0-10, 0 KO’s) of Glan, Sarangani with a right hook to the mid-section for in the third chapter.   Their collision was in the lighting fast 105-pound weigh-class.
Light flyweight Tonton Saludar  —   younger brother of WBO minimumweight world champion Vic Saludar  —  was originally scheduled to see action in Brawl at the Mall 12, and he even took part in the GAB official weigh-in ceremony.
However, it was not possible to find him a fighting partner.   Best of luck to Tonton Saludar next time.
Brawl at the Mall 12 was organized and staged by award-winning promoter JC Manangquil of Sanman Boxing in association with Dexter Tan and Robinsons Place Gensan.
The twelve fights were sanctioned by the Games and Amusement Board (GAB ), supervised by GAB Davao OIC Datu Fahd Yasser A. Sinsuat and experienced GAB Davao officer John Kenneth Improso.

The author Carlos Costa is a boxing reporter of boxing living in the Philippines.   Carlos can be reached at carlos512@hotmail.com and whatsapp/viber/wechat:  +639184538152.
Share: 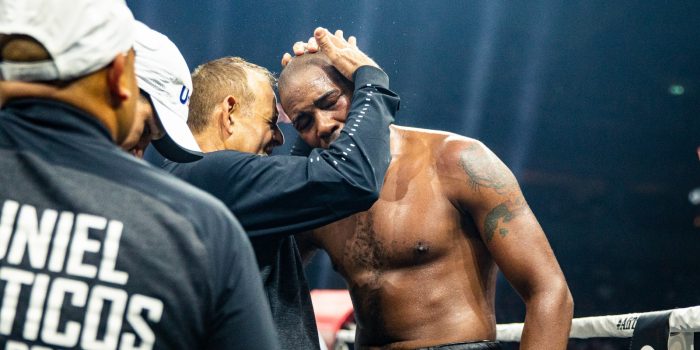 PEDRO ROQUE: “MUHAMMAD ALI’S SPIRIT IS WITH US” 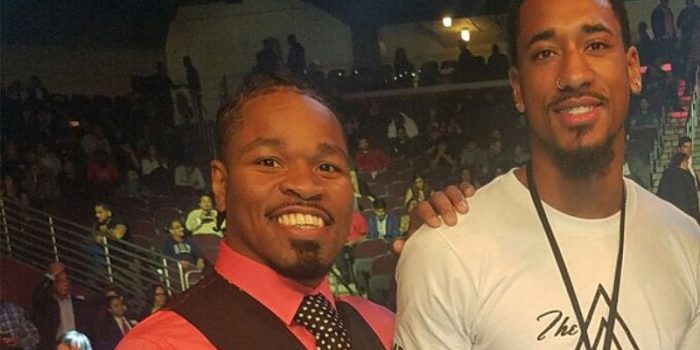