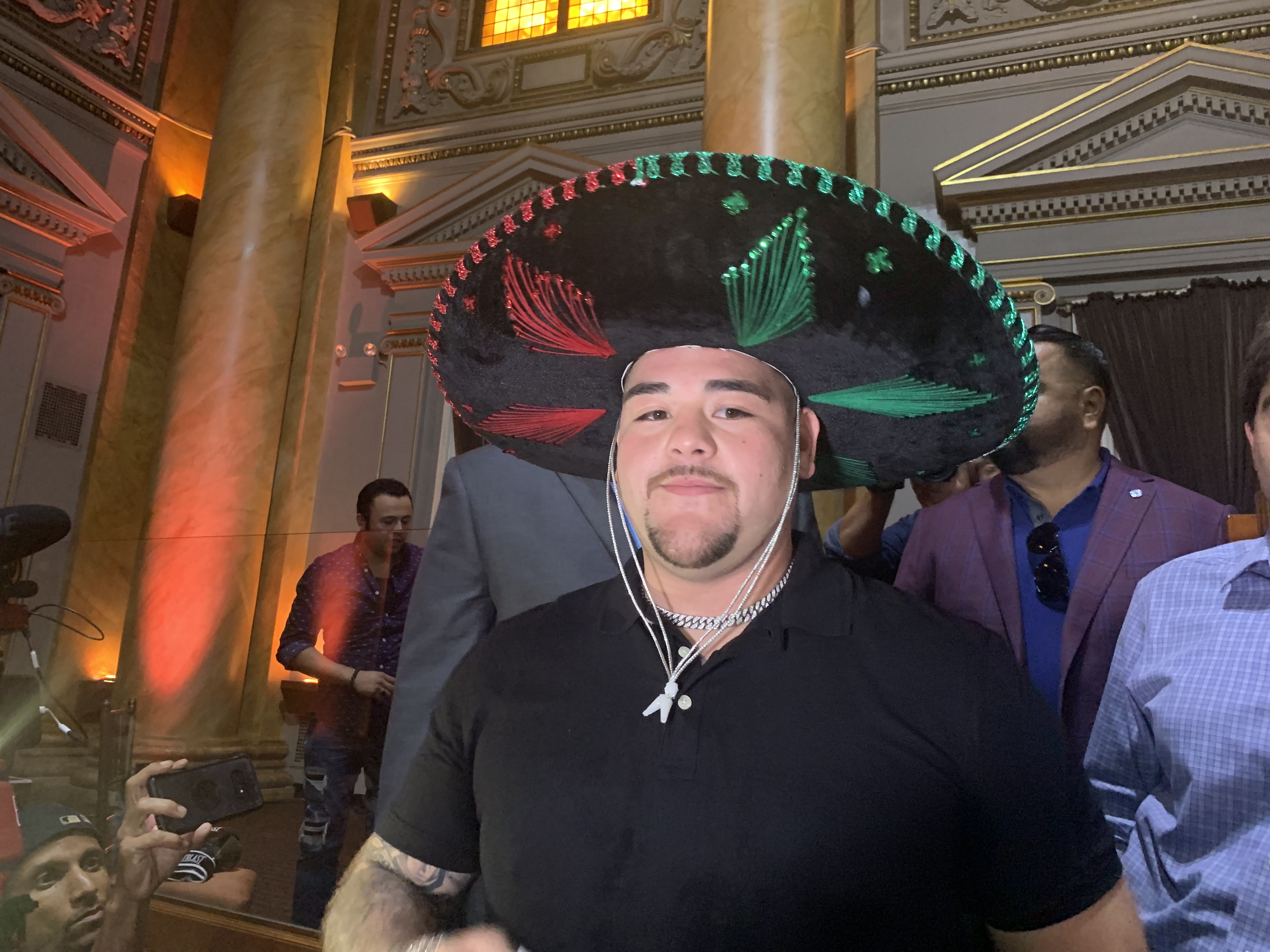 In talking to Andy Ruiz Jr. yesterday in New York, he said, “just because I bought all this Ice, doesn’t mean I’m not fully focused on the Fight”.

There is no doubt Andy Ruiz Junior has the Pedegree, skill and talent To remain champion. Question is – will he come into the December fight in tip top shape against a determined Anthony Joshua.

My Fight Prediction based to Ruiz’s weight & conditioning:

The Ruiz/ Joshua New York Press Conference was a good one for the books. The new Ruiz came into the building surrounded by security and sporting a good amount of Diamonds & Gold. Joshua was the same as always, respectful to all and very humble.

Both guys said the right things and both are confident to claim victory on December 7th.  Both boxers and their teams understand the enormity of this event and what’s at stake.

For the next 3 months social media will be buzzing with Talk, Predictions and Anticipation for the Biggest Heavyweight World Title Fight in recent memory.

What makes this fight bigger then any fight in Heavyweight history is the social media factor. In many ways this fight / event is a Guinea pig – Test to see how the world follows this Mega Fight.

The Ruiz / Joshua Rematch Buzz will of course start with the Boxing Fans & their Pulse, but as the event draws closer, the world will talk, every newspaper, radio and TV show will mention this event and by the time the big night comes, we know the event will be successful and Boxing will be Bigger & Better for it.

This is a Heavyweight Fight with multiple belts / History & Glory on the Line. Both fighters are planning everything from training & nutrition to Game planning & strategy.

Joshua’s mind set is focused and in the right place for the second fight. Ruiz is still talking about the first fight and seems very satisfied with his position and accomplishments.

Little did we know, prior to the Mike Tyson fight in Japan,  Buster Douglas had some personal family circumstances that motivated him to train like never before, resulting in Boxings biggest upset. Eight months later when Douglas fought Evander Holyfield, he was so large, it was difficult to recognize him resulting in him getting KO’d in Round 3.

My Prediction Hinges on Ruiz and his Training. In Speaking with him yesterday, Andy assured me and other media members that he will come into the rematch 13 pounds less then the initial fight on June 1st.

The Outcome / Result According to Andy Ruiz Jr. Official Weight:

If Ruiz Weights In @ 275 or More, I see 3rd Round Win for Anthony Oluwafemi Joshua.

If Andy Ruiz Jr. wants to keep the belts, he has to come into the fight at a lean & mean – Ready 253 pounds.

In speaking to Andy, he says that his team’s plan is for him to come into the December fight at a ready 255 pounds. (by my calculation – using the Chart above, if Ruiz comes in at 255 pounds, this Fight goes all 12 rounds. At this point in the game, my best guess is he will be 261.5 pounds – resulting in him losing in 9 rounds.

Talk is cheap at this point, it’s all about what these two champions do in the gym that’s gonna count.

This is a huge fight – No Doubt. Once all the numbers are in and everything is weighted, Matchroom Boxing will find out that it would have been better to do this Fight in England or the United States.

While the site fee is great & tempting, Saudi Arabia actually got a steal of a deal, and while everyone made money, I think 35% – 40% of the total benefits was left on the table.

If you add in the USA prime time broadcasting, Europe PPV #’s, New DAZN subscribers and name recognition for the winner of the prize fight, taking this to the Middle East might have been short sighted.

The way to maximize your income in Saudi Arabia is to have a single headline star in the main event. For example Manny Pacquiao, or Anthony Joshua or Andy Ruiz Jr. or Canelo Alvarez. With proper bargaining that could earn you a site fee close to having two major stars face each other.

A perfect example would have been the first Joshua /Ruiz fight, when no one knew who Ruiz was. A fight of this magnitude should have been in the West for many reasons- some unmeasurable.

Good Luck to Both Competitors & may the Best Man Win.

Not Creating The Buzz:

When Mayweather / Pacquiao was made, boxing fans were enthusiastic and the media covered the news with excitement and from the heart. There is much to be achieved when it’s from the Heart.

Ruiz vs Joshua 2 is huge- no debating that. But how much will we write about it from the heart?

First, the fight is in Saudi Arabia, not only will the fight take place in a weird time zone with regard to the Western market, but this location setting is seen as a money grab which doesn’t honestly excite the media very much.

If Anthony Joshua wins, it simply shows that he Originally overlooked Ruiz and rid the wrong. If Ruiz wins, it proves many fans right in Ruiz winning and this time it is no big surprise at all.

There are many ways and perspectives to look at this Heavyweight Clash, but never underestimate the passion and heart of the Media.

Eddie Hearn: “Boxing is A Beautiful Brutal Sport and Every Fighter Deserves Respect”. 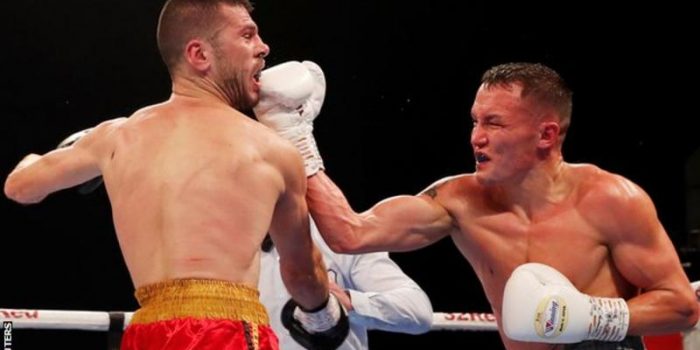 Josh Warrington Calls Out Everyone after Dominant Win 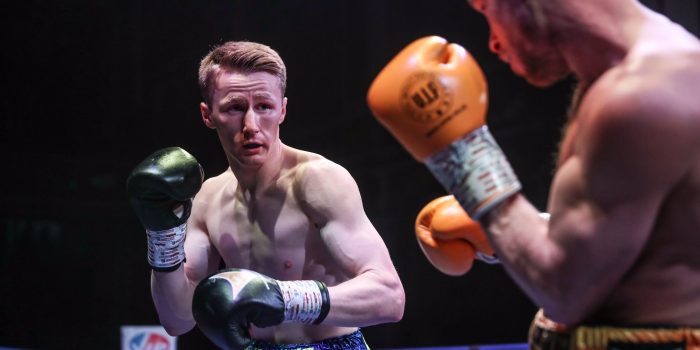 Nathan Bennett: My opportunity has arrived

Nathan Bennett says he is ready to seize a "once in a lifetime" opportunity when...