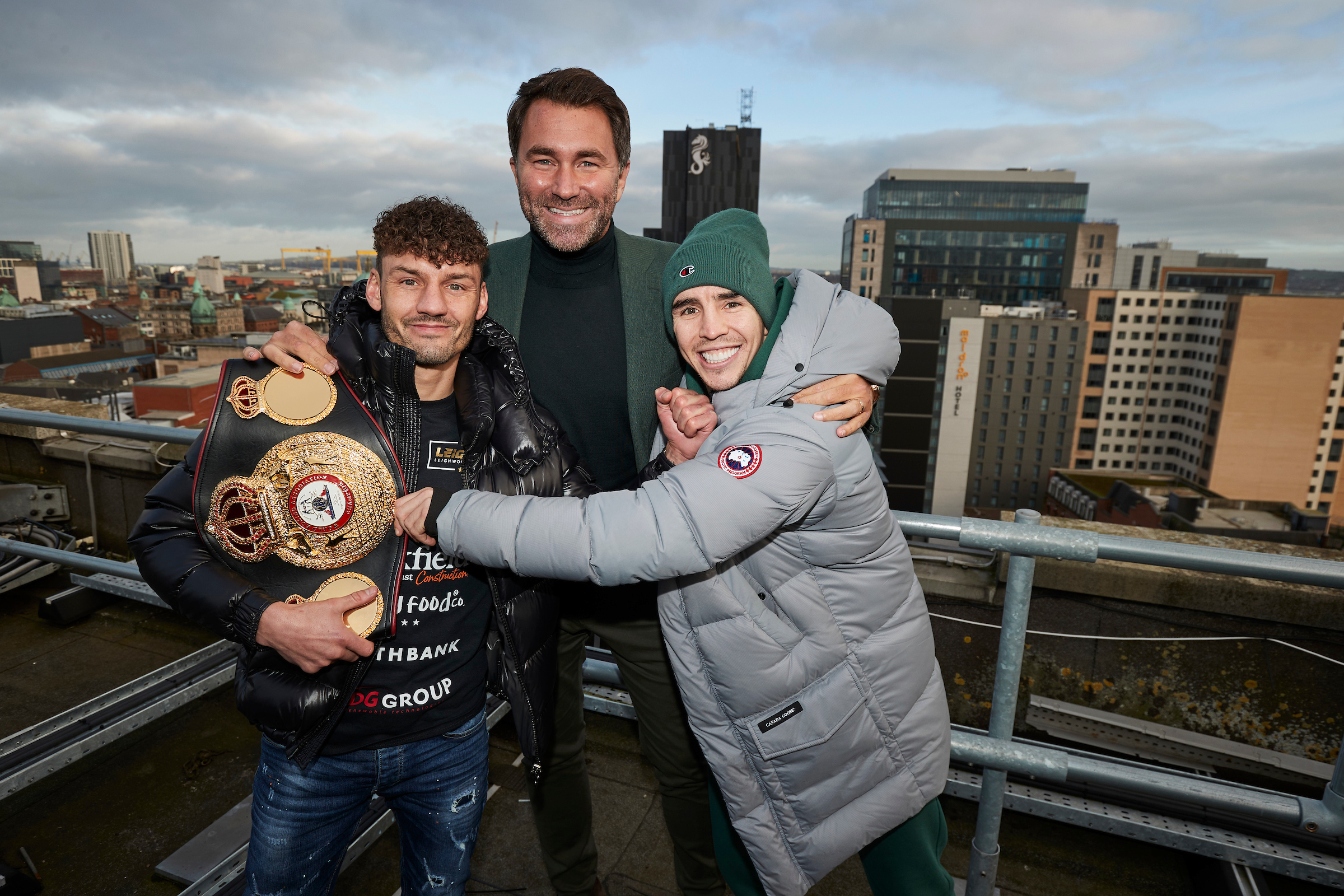 “We know this main event fight between Michael Conlan and Leigh Wood is taking place in Nottingham, but we wanted to come to Belfast because it’s been a while since we’ve been here for a fight.

“So many times, over the years we’ve seen young fighters from Belfast come through and fill up arenas, here in the Odyssey Arena and of course fight so successfully in England and America.

“This young man, Caoimhin Agyarko, we’ve never really had the opportunity to do a proper press conference with him because of COVID restrictions and the world we live in, but we’re delighted to welcome this young man to the Matchroom Boxing and DAZN team.

“About three or four years ago, someone approached me, said we have a very special fighter here you need to look at. We get a lot of those phone calls; we’d just finished the Olympics and we were signing fighters and unfortunately, I’d never heard of Caoimhin Agyarko and didn’t sign him that day. When I watched him fight after that I kicked myself very quickly and said we missed one there.

“When the opportunity came up with Paul Ready and STN to sign him recently, we signed him immediately. He won his first title, the WBA International Title in Liverpool, great performance and I’m delighted to announce that Caoimhin Agyarko will be in major title fight on the March 12 card in Nottingham.”

“I’m not a performing monkey, I’m a fighter. I’m not a media dream, I’ve not been managed well, I’ve done it from the bottom up. I’ve earned everything off my own back the hard way.

“In my opinion I don’t think Mick’s every been in a 50/50 fight, this is new for him, but I’ve come through those challenges. I’ve been in the bookies not favourite and come out the other side from a pressure point of view. He is right, there’s going to be a lot of people and a lot of pressure, but I thrive on pressure. My whole career I’ve been thrown in and come out the other side, we’ve got seven weeks to find out and I can’t wait.

“My greatest assets don’t even get talked about one bit, dedication, I’ve put my life on hold because boxing is everything to me. It always has been since a young age; he’s going to look at these defeats but that’s going to work in my favour. I don’t need to nit-pick through his performances, I know what I’m going to do, I know exactly what I’m going to do.

“Michael’s a great fighter, he’s had some really great wins and is going to be a really big challenge, but I know what I need to do on fight night. He’s a great champion, a great public image in Ireland, massive, all the best on fight night because he’s going to need it.

“I’ve been there before, in fights in my career, in my life. I’ve not had a promoter, anyone steering me in the right direction, I’ve not had my dad taking me to the gym from a young age. I walked in the gym on own 10/11 years old and it takes a lot to do that, to get to this point on my own. I’ve got here on my own with pure determination and grit, resilience and refusal to give up and that’s what it’s going to take to come through this fight and that’s what I do.”

“There’s a complete difference between saying I think someone’s going to lose a fight and being realistic, which is vital in my opinion. If you go the wrong way about a fight, you can lose a fight. This is a fight that if either man goes the wrong way about the fight, they can lose – that’s why it’s drawn so much, and the tickets sales are flying. It is that type of fight.

“I think it’s important to me that you have to be realistic, you have to have the mental strength to absorb that and perform at your absolute best.

“There’s been adjustments along the way, maturity, whatever it is – I stand on what I said. I’m not going to be deluded and say Mick can’t rack up a few rounds, of course he can. He’s a very talented boxer and very versatile fighter. I do believe that are certain tendencies and habits there that leave us with the opportunity to find that fight changing moment will happen on the night.

“I don’t think physically size will be a factor, no, although he’s not known as a strong fighter Mick is a stronger than what his record may suggest. There’s a reason why he struggles to make super-bantamweight, he’s not tiny but Leigh is a good size featherweight. I don’t think we’re going to go into the fight relying on physical attributes, it’s a tactical thing that he’s going to win this fight.”

“I’m in the back garden, I want to come and say what I want to say. There was no fear in me, I’m there and I’m going to talk my shit and say what I needed to say. Leigh stutters, he tries to spit things out and wasn’t making sense, but you know, it’s part of the fight game.

“I love this, this stuff gets my ready to go, I could fight right now. I’m ready to go right now, Leigh is not and doesn’t need to be until the fight night 100%. That’s the thing, I’ve stayed professional, I’ve been in training since September, I thought I was fighting in December – I kept training, stayed in shape, stayed fit. March 12 you’ll hear I’m the new and that’s all I want to say.

“I know exactly what it’s like fighting under that pressure of fighting at home, I’ve done it three times and every show has been massive. Loads of people there, so much expectation, a purpose-built arena in a park. This guy doesn’t understand it, he’s never felt it, you can see his demeanour has changed from yesterday.

“He doesn’t understand the pressure’s that come with fighting in your home city, he had the opportunity to fight at MSG and he can come to Belfast and fight if he wanted to. But no, he wants to fight in Nottingham, in the City Ground before he retires. He knows I can beat him.

“There’s possibilities in anybody losing, anybody, I’m not going to say it’s impossible, but he will not beat me it’s as simple as that. I really respect him as a fighter and a person, but again fuck all that until the fight is over. Once the fight is over, shake his hand. Happy days, can’t wait.

“I’m ready to go right to the end, it doesn’t matter, this fight means everything to me. I’ve taken myself away from both my children, the first time I’ve seen them in four weeks was last night and it’ll be the last time I see them in seven weeks until the fight. This is my life, the only thing I know is boxing, believe me on March 12 I’ll be the new, 100%.

“This is the start of my journey to become the best fighter in the world, once I win this belt, I’ll go on to do what I have to do after. I have to win this belt first before I even have to think about that.”

“We know we’re the B side in this, we didn’t fly on private jets this morning, we flew on nice British Airways with the security lads – it was a very tight squeeze. We said yesterday what this means to the family, to Michael, to Ireland.

“Michael has carried the flag of Ireland from 2012, pressure on his shoulders that other fighters cannot comprehend. Leigh can’t comprehend the pressure Michael’s had to fight under, whether it’s through the Olympics of World Championships as an amateur, under the microscope as a professional, making his debut headlining a card.

“No one does that, that brings scrutiny and more eyeballs to you which is very hard to match, he’s had to learn in front of everybody and learn the hard way because he’s been open to criticism and scrutiny. This was all worth it to get to this point because there was a lot of learning, ups and downs during the four years he’s been pro.

“We’ve done it across America, over here, now we’re going to Nottingham. As I said yesterday, this is destiny, going to the opponent’s backyard and becoming a legend, creating a legacy. Ripping it away from him in front of his family and friends, the people he’s crowd up with, it doesn’t get much sweeter.

“We’re working-class kids from West Belfast, it’s an area that breeds them tough, we’ve come through tough times. It’s engrained in us, everyone in this room has got a bit of fight that they don’t have in places like Nottingham. This is a tough city; they breed them hard.

“He’s going to get everything checked, I expect this to be his toughest test, Leigh Wood is a fantastic fighter – the hardest hitting featherweight in the world I’ve heard Ben say. Harder hitting than Oscar Valdez he said yesterday, he’s going to test Michael in different way, no doubt about it.

“It’s going to be so good when March 12comes, sitting 11-12 o’clock at night with the new WBA World Featherweight Champion and a nice big f*ck you to everyone else.

“Everything I stated yesterday was true, I gave him the opportunity to own up and he didn’t, so he lied. Everything he says from here on in I don’t believe, it’s bullsh*t.

“I like Leigh and I like Ben, but everything I stated was true. We also have more proof, screenshots from texts stating Ben’s doubts of Leigh Wood. I believe Ben believes in Leigh’s power; does he believe in anything else? No, he doesn’t.”

“Another Irish card, it was a great win for me last time out, a great learning fight, an unbeaten opponent who came to fight. Obviously, I could have performed better but thankfully I’m out in quick succession and looking to improve from that win.

“The Belfast fans have always supported me the amateurs and now into my professional career. I saw in Liverpool it was very noisy when I was fighting, and I expect the same in Nottingham – especially with Mick on the card. It’s a great card for me to be on, by the end of the year I want to be headlining shows or fighting back home in Belfast and giving them some great nights.

“I have said in the past that I’m a ten-fight novice, another two of three step ups and I’ll be ready to headline shows back home. I put myself in the top 15 in the world and that’s where I wanted to be by the end of 2021. Heading in 2022 it’s to go and get some names on the record.

“An Irish invasion, every person at this press conference will be at the fight and plenty more. It will be a very noisy and I can’t to relish the moment, hopefully have a good performance and a good win.” 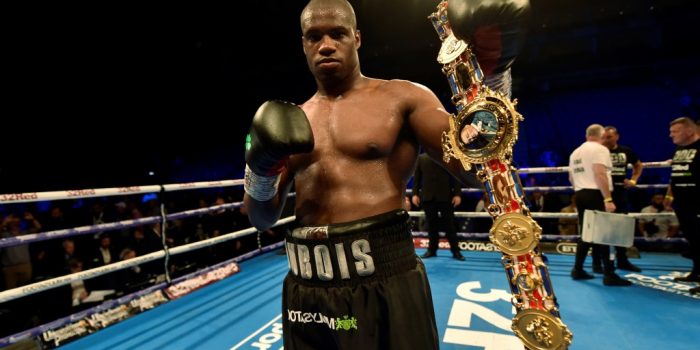 By Frank Warren THE LANDSCAPE DIDN’T noticeably shift by much following a second sitting of... 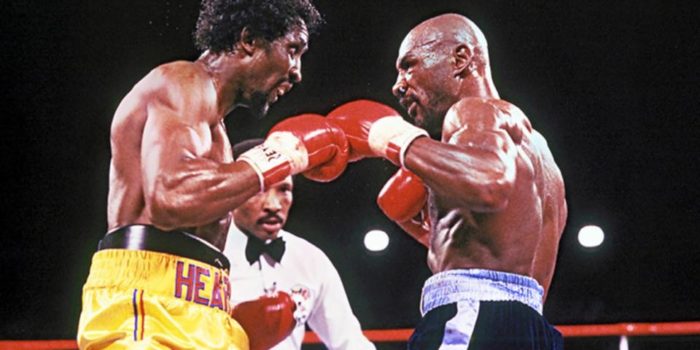 Greatest Middleweights Of All Time

Greatest Middleweights of All Time: Out of all the boxing divisions, the middleweight (160 pounds)...